So after reviewing Miku, its seems only right that Rin is the next to be reviewed. Arguably, Rin is the 2nd most popular vocaloid out there after Miku but that’s open to debate. Rin has a really unique look that derives some essence from Miku but at the same time creating something that is wholly hers. I got my Nendoroid before GSC announced the support version of Rin and Len so when I got it for around 3600Yen it was considered a pretty decent price as Nendo Rins were pretty hard to find and would cost you a pretty penny. Now that GSC is going to re-release this cutie-pie with the support items, well you know you got yourself a bargain at 3500Yen! Without further ado, here is Rin outta the box! 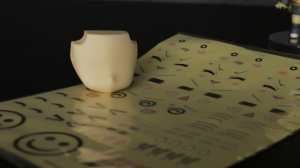 Rin comes with 4 faceplates, 1 bent arm with a microphone and 2 bent legs. Interestingly enough, one of the faceplates is left blank and GSC provided a sheet of stickers for you to adorn it with. In theory it sounds like a sure winner, in practice the reality of placing stickers accurately on the faceplate and mimicking the lock of the sticker sheet is harder than it looks. The end result doesn’t look that great as well with the edges of the stickers showing very obviously. 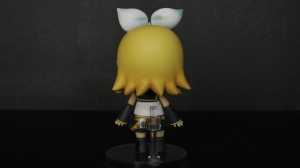 The front and back view of Rin. Rin has the same detail that Miku had and she although she doesn’t have the frills that Miku had, her bows on her head and chest all have a certain degree of shading and her belt is painted well with no spillovers. On a side note, the bows on her head are moveable, although not to the degree that Miku’s pigtails are able to. Still a nice detail though.

Rin also has the frilly thing going around her sleeve cut off and its painted accurately with paw prints on the outer edge of her boots, socks thingy. 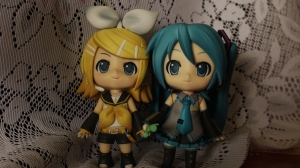 In comparison to Miku, Rin have more a fresher look with the pants and bows so she is different enough of a character to warrant a purchase, even though their face plates are similar. Rin also comes with the microphone in which your Miku or whoever can use it to sing! BUT one thing I realised when I was taking pictures of Rin is of her faceplate! Or her head.

See the difference between Miku’s head and Rin’s. The groove below for Miku (left) is all the way through while Rin’s has a blockage making the large groove separate. 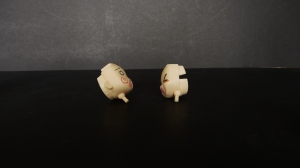 That is why Rin’s faceplate (right) has a cut into the side compared to Miku’s. This is to accomodate Rin’s earphones which are not removable. This also mean Rin has no ears AND Rin cannot use faceplates without the cut at the side. You want a Hachune Miku faceplate on Rin? It’s a no go, since the faceplate cannot fit into Rin’s head. That’s quite a bummer and I wonder why GSC did not do the same thing they did with Miku, with removeable headphones. That’s quite a let down especially since Rin is so cute. 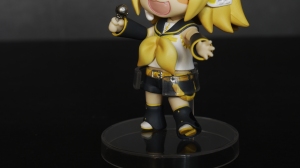 Rin comes with a clip on stand. I like this stand for how functional it is and how solid the Nendoroid stays on it. However, that doesn’t compensate enough for how OBVIOUS it looks. I mean it feels like Rin is being grabbed by a robot’s claws and she is struggling to get out of it. From the back, from the front, you can see those huge plastic claws holding her in place. They could have just given the leg clipping stand no? And the claws will not close completely on Rin since the size is not completely right so there will always be a gap between the Nendo and the stand, which means Rin can still shift when you’re moving her. Doh!

Honestly, if you already have Miku, how can you not have Rin? She is such an awesome compliment to the Nendoroid Vocaloid line and I honestly got her for her  >o< faceplate since she looks so silly happy with that on. Rin comes with enough accessories for her and the stickers that accompany the faceplate might be great  for your Nendoroids if you can make it work. If you manage to snag the Support Ver, of Rin it would be even more worth it with the slew of accessories it now includes. However if you got no idea who the Vocaloids are, go and check them out and if Rin is your cup of tea, the Nendoroid would be a good place to start since the Figma is hard to find nowadays.