The virtual songstress, in Nendoroid form! Hatsune Miku is now a cultural phenomenon, judging by how popular she is in being cosplayed and the slew of Miku products hitting the market every now and then. Today, I will be taking a look at the teal/turquoise hair Diva in her awesomely cute Nendoroid form by Good Smile Company!

I had her since March this year but didn’t have the feel to open her until now. When out of her box, this is what you get:

3 faceplates, 1 hair part to go with the Hachune Miku faceplate, 1 leek, 1 bent arm, 1 fist  and 1 bend leg as extras. I don’t really understand what’s the extra hairplate for…since even if you put in the Hachune Miku faceplate you can still attach the original hair part without needing to switch the Hachune hair plate. The difference between the 2 hairplates is that the original had more grooves and looks more detailed…only slightly more than the optional one.

As expected from Good Smile, the details are nicely painted on and I didn’t have much frills that had paint spilling over that is noticeable. On her front pocket the yellow line, the word ‘Vocaloid’ is printed below and the wording is crisp. The sculpt is clean and smooth so as the frills really pop off her shirt and skirt and it really shows the quality of this Nendoroid. 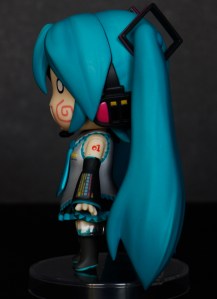 The side views of Miku. One of the things I really like about Miku is the square *clip* thingy that are hanging by her pigtails. It looks like its floating and breaks up the monotony of Miku’s hair nicely. The pigtails are on a ball joint and you can swing it around to mimic motion or surprise. Her headphones are removable and its on a tiny peg that plugs into the back of the head. So everytime you change a faceplate, you gotta pop the earphones off and then switch the faces. This is because the earphones fall neatly on her ears, so even if Miku’s a Nendoroid, GSC make sure the whole thing still makes sense! Her LED arm sleeve is done nicely and even though its now tiny, the whole thing is still crisp. 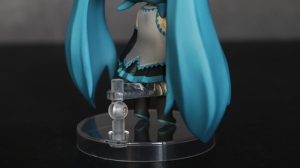 Miku comes with plug in skirt Nendo stand. Maybe I didn’t try hard enough but I can never get her tight unto the stand and lock her into place. So everytime I tap her accidentally from the back, she will fall flat on her face as she is only leaning on the base as a support, not pushed into it. However I like this stand the most of all Nendoroid stands maybe other than the arm stand. It’s unobtrusive, simple and from the front it can’t really be seen.

If you’re a Hatsune Miku fan, I reckon you should already have this Miku, maybe even Race Queen or Snow Miku. Nendoroid Miku used to cost a pretty penny due to its popularity and demand but since GSC re-released her quite a few times, her pricing has gotten constant and now she is quite easy to find for a decent price. Good places to look for her would be eBay (beware of Bootlegs) or Ami Ami, Hobbysearch. etc. Miku in all is a very cute Nendoroid, VERY cute Nendoroid especially when she is doing the singing pose and I do not regret getting her at all. She is an iconic character and it translated very well into Nendoroid form. Things I dislike about Miku is that she is slightly loose and sometimes it’s a pain to pose her when her hips and pigtails keep falling off. However it’s a Nendoroid and not an action figure so you shouldn’t expect them to take alot of abuse so as long as you’re patient and take your time, there is no reason to get frustrated with Miku.  Miku is one of the earlier Nendoroids at No.33 considering now that there are now more than 100 over Nendoroids but still she holds her own very well. If you’re bewildered by what Miku to get since there are so many versions out there, get this! Since it’s the ‘default’ Miku and probably the cheapest, excluding the Nendoroid Petit version. 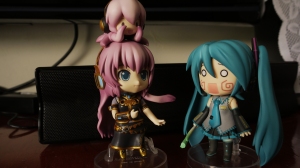 For the starting collector of anime products or Miku, Nendoroids are a fantastic place to start with. They are high quality, has a wide range of characters and are super cute. They cost around 3000Yen to 4000Yen depending on rarity and age. Older Nendoroids that GSC has stopped production will cost more and newer Nendoroids might be sold out due to popularity. Its important to do your own reseach before getting any Nendoroid so you do not pay through your nose for it. Always be aware of Bootlegs(fakes) and if it’s too good to be true, it most probably is. If anyone has any questions on Nendoroids just post a comment here and I will be sure to help you as much as I can!