Here is the review for the Century King Black Sun, Kamen Rider Black! Whenever I see Kamen Rider Black, I’m reminded of my childhood watching tapes of it on my Dad’s player with Minami Kotaro riding Battlehopper. Good times. =)

Anyways, I’m fairly new to the S.H figuarts line and got into it only around May this year. I resolved to collect all Showa riders so when I found out how rare Kamen Rider Black and how expensive it would cost to get him, my heart kinda fell. Thankfully enough, Bandai probably had enough complaints from people and re-released both Black and Black RX around June this year and I hopped onto Hobbysearch to place my orders!

I heard nothing but praise for this line so how will KR Black fare and will my expectations be proven right or crushed out of the box? Here is Black out of the box.

Black comes with only optional hands, no weapons or anything of the sort. However Black didn’t use any weapons back in the show so no problem there for me. The hands include 1 pointing hand, 2 raging open hands, 2 chopping hands and 2 clenched fists. All in all, a pretty large variety to play with.

Out of the box, the first thing that hits you is how awesome the compound eyes look, especially when it reflects the light. Both the eyes and the Kingstone belt are made of clear red plastic which adds to the whole aesthetics of the suit. You can also see how detailed the belt is painted and the coloured stripes (Power Stripes) around the body. Correct me if I’m wrong but on the original suit, it’s some sort of tape that wraps around the suit. On the SHF, those are actually moulded and then painted, which would account for how realistic and crisp it looks. Fantastic! 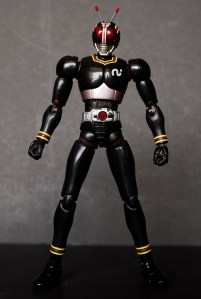 The front and back view of the SHF. It might strike you as being slightly too thin for an action hero, especially the waist area. The arms and legs are pretty slender as well compared to the chest and you can spot some obvious nub marks on the back of the thighs. It might not be visible here but the feet are made of die cast which I noted are shiny black and when viewed against the rest of the body, it’s rather pecuilar as the body is matt. The logo on the chest is also printed on and not carved so be careful when moving it about as I heard people scratching off their logo accidentally.

The side view of KR Black. The stripes really stand out from the side and I gotta say, the stripes have to be my favourite part of this SHF, considering how well it’s done and how strong the colours contrast with the black. I’m not that big of a fan for the antenna though. The original suit has thinner wire antennas and I’m sure Bandai could have replicated that with hard plastic but I suppose for durability and playability purposes they made it of a much thicker rubber. Personally, thinner antennas would bring out more of an accurate depiction which is something I would like more but it’s no deal breaker.

Articulation wise, the arms can pretty go wherever you want them to, the shoulder pads swing up when the arms go up so no hindrance there. The legs have more of a restriction though. Unlike newer SHFs who have a swinging hip joint which allows the whole leg to have a wider range of motion, Black’s leg is fixed onto the joint, so the highest he can bring his leg up is 90 degrees. The photo pretty much shows how much he can raise his leg up. The diecast feet are a paint to pose because they are tight so I didn’t move them around much. I suppose they will get loose over time with play but the weight of the feet does help in a way to balance the figure, so all’s well.

An interesting thing is how Bandai moulded the Bio-Armor (brown joints) underneath the suit. This gives the suit much more definition and highlights the fact that it looks like a little man in a suit, all in the palm of your hand, Well done Bandai!

Is it worth waiting for Black to get re-released and getting him in my conclusion? A resounding yes! The paint job is a joy to look at, Black is a solid figure that poses well and the sculpt although off in some places, is pleasing enough to make a fanboy squeal in joy. If you are a Showa Kamen Rider fan, a Minami Kotaro fan, how can you pass him by? Especially since now that it’s re-released which makes it that much easier to find. For the casual/Heisei fan however, if you need accessories or flashy armour to go with your Kamen Rider, this figuart doesn’t have it.  Personally I think Bandai did a good rendition of an iconic character in S.H. Figuarts form which made me really glad I added him to my collection.

As always, thanks for reading.