Today I will be doing a short review on the 1/8 figurine of Asahina Mikuru from the series “The Melancholy of Suzumiya Haruhi”! Mikuru was released in July of 2008 by ALTER. Someone was selling it at a local forum for around 3300 Yen and compared to the retail Yen price of 6000Yen it’s almost a 50% decrease so I grabbed it considering how much I adore ALTER figurines.

Not the most attractive of boxes but it follows the pattern of Haruhi and Yuki (which I should be reviewing in due time) and does its job well.

Mikuru comes packaged with no accessories and a PLAIN plastic base. Compared to how bases have evolved now (clear plastics, creative mounts.etc) this is really boring. 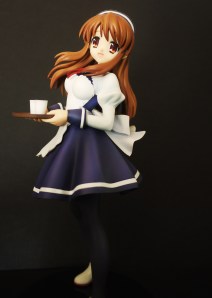 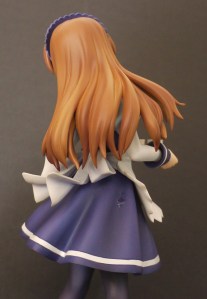 Mikuru out of the box, front and back view. She feels solid enough and the paint application although simple is very well done. It’s ALTER so what do you expect? The hair sculpt is really nicely done and conveys a sense of motion, like Mikuru just turned and looked at you. The ribbons at the back of her costume is also flowing together with the hair creating a dynamic effect. The drop of liquid on her skirt is not glue or anything of the sort, it’s just water left over when I accidentally touched her with wet hands. =3

A closer look at the tea Mikuru will be serving you. It’s clear plastic to mimic green tea. Plain but convincing. I also like how the red ribbon stands out against the maid costume.

It’s a figurine with typical awesome ALTER quality from a really popular Anime so what can it be lacking in? First off, it’s a generic standing pose and although motion is sculpted in the hair and bows, it still doesn’t detract from how boring the pose is. Secondly the costume’s colour is very soothing and it doesn’t pop out at you and get your attention. Mikuru’s face looks sufficiently happy enough but all happy Anime girls look like her so it’s really common. Overall, the figurine suffers from being too normal and nondescript and being Mikuru a crying face would be more apt? Which Maxfactory did better? I wouldn’t recommend anybody to get this Mikuru due to how plain it is but if you’re a Mikuru fan and want every iteration of her, go ahead! I don’t regret getting her as this completes my trio of ALTER Haruhi, Yuki and Mikuru but seriously, get the Maxfactory Mikuru as it is better, in dynamism and character accuracy.

ご主人様, would you like some flowers to go with Tea?

as always, many thanks.