Ta-ja-doru! Tajadol is just one of the myriad combos of Kamen Rider 000 and it’s also known as the Blazing Combo. It’s a combination of Taka (Hawk) Kuja (Peacock) and Condoru (Condor) and it’s all REDDD! Of all of 000’s combinations, Tajadol appeals to me the most of how red it is (one of my favourite colours) and how it’s combinations are all birds, my favourite animals. =D

Boxes of Tajadol SHF and the effect parts set. The effect parts set is an exclusive so for all intents and purposes, is meant to cost you an arm and leg. However Tamashii Nations South Asia has graciously brought it in at an affordable price of 2300 yen. How can you refuse? =3 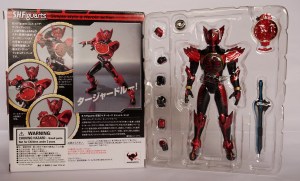 We will start the review with the rider itself first. Tajadol comes in the standard SHF box, nothing new there.

The front and back of Tajadol. Tajadol’s compound eyes differs from normal riders in that instead of just the eyes having the clear plastic, now the entire face is in clear red plastic with a visor over the face. Cool but it just makes everything really reddd. The paint used is a glossy rich hue and although the black is unpainted, the red does enough to bring the bling to the figure. The emblem on its chest (0 lung circle) is a Phoenix, how cool is that! 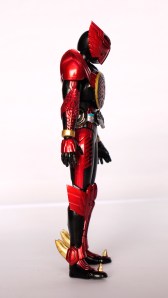 The talons at the base of his feet are nicely painted with no bleeding over. The belt and 0 scanner are both removable. 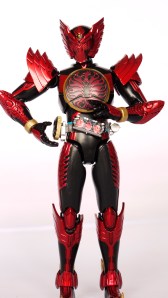 The articulation is pretty standard for a SHF with a few issues. First off is the shoulder armour. When Tajadol raises his arm, there is an obvious gap and it looks strange. Second is that huge coin on his chest, that pretty much limits all abdominal articulation and it’s a problem afflicting all 000 variations.

For some reason, I forgot to take a complete picture of the accessories that comes with Tajadol so I will let the pictures I took with Tajadol do the talking.

Tajadol comes with the Medajaribur which is cool considering Tajadol doesn’t use it. Sadly the medals are only painted on one side which feels cheap.

The 0 scanner is also provided with the corresponding hand to hold it.

The Taja Spinner is nicely done and the front of is clear red plastic. And that’s all that Tajadol comes with excluding the different hands. 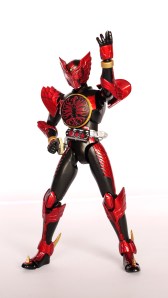 Tajadol is really striking in his colour scheme and has decent accessories for posing. Personally however, there is nothing exceptional in this SHF that strikes me as awesome. In summary, there are probably 3 reasons why you will be buying Tajadol. First off, you want to complete the 000 set of different combinations and got suckered into the rabbit hole. Second, you are getting it because you have the effect parts set and it’s only logical you get Tajadol. Third, it’s because you love the colour red so much. For me it’s mainly the 2nd reason with some pinches of the 3rd, so let’s go on with the review for the effect parts!

You’ve seen the front, now its the back shot. I really wanted this expansion mainly for the peacock display. It looks really awesome and I wonder how it will pan out when I start displaying it.

The set comes with the massive peacock feathers, a custom clear red stand, two condor legs, kujaku wings and some small candroids. First thing I noticed is how plasticky the peacock feathers are. You know those plastic fans you get for free sometimes? Yeap its something like that. It feels cheap and really shiny…dang my reason for getting it shattered. =(

Here is the exclusive base for Tajadol! It features the medals used for the combo and it says “taka! kujaku! condoru! TAJADORU!” 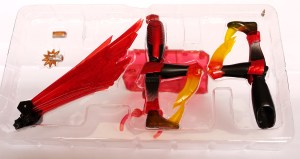 The candroids are not very detailed and easily overlooked. The rest of the parts look really stellar though, clear plastics is WIN in my book!

A closer look at the Kujaku wings. It plugs securely into Tajadol’s back, Just remove the cap and pop the wings in. The wings are done in a different shade of red from Tajadol’s armour and can fold inside and backwards.

For some reason, the moment the wings come in, Tajadol transforms from an ‘Ok’ SHF to something much more epic. Maybe it’s me…?

The wings add more width and movement to the SHF. As the red for the wings are different from Tajadol, it stands out on its own and adds more to the rider.

When you’re a bird, you got to have aerial poses! And that’s where the stand comes in ! Time to switch on the deadly looking Condor legs! To do that..

…plug out Tajadol’s legs and switch it around. Do it in a downward motion and hold the leg tightly. Use firm but steady pressure to slowly pull the leg from the joint. Too much and the whole hip pops out, too little and you will just be loosening your joints. 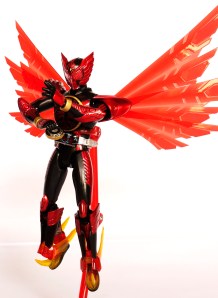 The talons are moveable and can open and close like a mouth. This is the furthest I can tuck them back to make them resemble Tajadol’s normal feet. The ankles are all on ball joints and can rotate. Simply said, it’s similar to Tajadol’s normal legs except it’s slightly more fragile around the lower legs since it’s made of clear plastic.

With the Condor Legs set up, there’s a whole new dimension to Tajadol. The yellow at the talons is a nice departure from the mono-red of Tajadol and gives the effect of power surging within. But where would a rider be without his rider kick?

If fire effect parts were given for the Prominence Drop , it would be so much more awesome~ 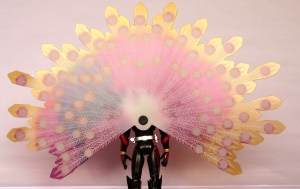 Time for the effect part I was so eagerly awaiting for! The peacock display! It plugs into the same hole that the Kujaku wings does. The back looks rather sad so let’s see it from the front!

The peacock display is as light as a feather and Tajadol can stand with it no problem. However since its so wide, a tiny bit of wind would knock its balance off. It looks really cool and because of it’s size, it brings more substance to Tajadol.

It’s really hard to see the fine details for the peacock feathers unless you place it with it facing light directly. Also since it’s so plasticky, it’s a pain to take photos with it as it reflects so much. But the end product is well worth it as Tajadol looks so holy with the effect part on. The colours of the peacock feathers are also diffused lightly giving it a gradual glowing effect with splotches of yellow, pink and blue. 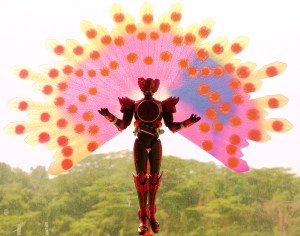 Is it worth the 2300 yen I paid to upgrade my Tajadol from mere Kamen Rider to Holy Birdman? A resounding yes! I initially bought it for the peacock effect part but what actually came through in the end were the Kujaku wings and Condor legs combo. The peacock feathers are flashy and big, but there is seriously not much you can do with it other than looking massively sacred . The wings and legs on the other hand are really pose-able and you can all sorts of interesting poses with them. Tajadol himself is really mono-colour and normal but when you add in all the possibilities you can play him with, it becomes so appealing! If you have Tajadol, you should really get this and if you don’t have Tajadol but able to get this expansion at a decent price, get this first THEN get Tajadol! The whole deal was pretty sweet for me as I only paid 5300yen total for both so if you’re able to get it for less, why not?