After Yui’s review, let’s move on to the K-On bassist, Akiyama Mio! Moeblob queen with her own fanclub, how will her Figma iteration pan out? Out of all the girls, I liked Mio the least so will reviewing her Figma change my mind about her?

Mio similar to Yui comes in the same packaging.

Mio’s front fringe is made of rubber and doesn’t obstruct her articulation at all. However the entire piece of hair at the back is solid plastic that doesn’t move so it does make her slightly back heavy and hampers her neck movement. Her uniform is rubbery with creases moulded giving it a natural look. More or less the same deal as Yui.

You can see how her hair flows up at the back to allow the Figma stand peg to be put inside. The joints are really obvious and her knee looks dislocated, only from the sides though and it’s a Figma thing so I’m already used to it.

Bass, bag, indoor shoes, tray of hands and 2 face-plates for the extras. 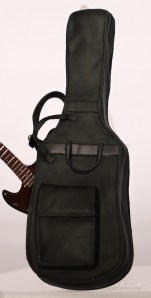 A closer look at Elizabeth, Mio’s bass. The basic colours are all painted on very nicely, even the little screws and knobs. Bass can also be stored into the bag via a slit by the side. =)

The stand plugs into the back of Mio and fits securely. Now for some face-plate switching fun!

The 2 face-plates provided really epitomizes Mio’s character and I had really fun making her do embarrassed poses. As much as I like Yui’s face-plates, she had 2 generic smiling faces so when compared to Mio the fun factor is slightly lowered. 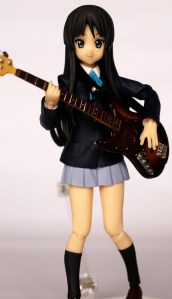 Elizabeth looks swell posed with Mio and since Mio plays the bass, no pick-holding hand was provided. I used the open palm to mimic the bass strumming she would do instead. 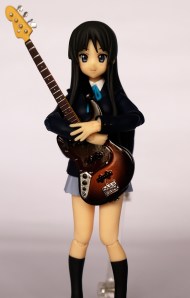 On an interesting note, Maxfactory painted her pantsu as it would have appeared when she fell down on stage, blue and white stripes! I censored it here so get your own Mio to see it for yourself! =3 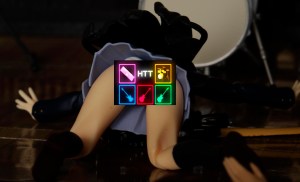 Changing expressions with other members let you re-create all sorts of weird scenes. For Mio’s angry face, I took it from Azusa’s Figma.

If I look at Mio purely as a Figma, it succeeded very well in my opinion. The bass and bag adds value to Mio and her shy expressions adds so much more playability. Her sculpt is accurate to her Anime counterpart and when coupled with the rest of the K-On members, it just brings joy to your poses. Mio is a great Figma to have in your collection and it’s a good introduction to the K-On figmas and what to expect from them. As much as I love Yui’s character in the Anime, I have to say Mio is the better Figma when compared to Yui. 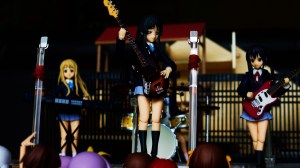