Next after Mio and Yui, would be the Gentlemen’s favourite, Kotobuki Tsumugi! Tsumugi, or Mugi is the keyboardist of the group and she is really sweet in the series and my second favourite girl after Yui. How will the Figma turn out against my expectations?

Everything is similar to Mio and Yui and instead of having a guitar, she has her keyboard.

Mugi has the same body as the other girls so nothing much to comment here. Her hair has a nice flowing effect from the back but the front looks slightly wonky, like thick noodle strips. Still, it’s accurate to the Anime so cheers to that.

Viewed from the side, Mugi’s hair really stands out, it has more volume compared to Mio’s hair. 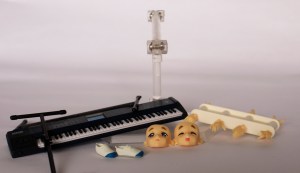 Indoor shoes, keyboard, hands tray, Figma stands and 2 face-plates. So far Mugi feels rather plain but that all changed when I took a closer look at the keyboard.

The keyboard has very nice details and the keys are different plastic pieces, not just one chunk of plastic painted black and white. That made it look realistic and props to Maxfactory for doing that since once you prop up the keyboard, the keys can hardly be seen.

The stand has pegs plugging into the keyboard so it’s secure. The details are also printed on at the front of the keyboard so it looks really complete. Compared to the guitars of Mio and Yui, I personally feel that Mugi’s instrument eclipses them in detail and look.

Mugi gives you the option to plug her in at the back or on her head. If you choose to poke the stand in her head, just remove a lock of hair that covers up the hole. For convenience’s sake, I choose the head to plug her in. 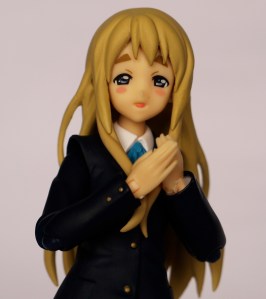 Mugi comes with 2 other face-plates, an awestruck face and a really happy face. Maxfactory got it pretty right on with these expressions and I can’t really think of any other more apt faces to give Mugi. As accurate as the faces are to the character, there really isn’t much you can do with Mugi other than her being happy all the time. =3 Not very sure if that’s a good or bad thing..anyways let’s move on with Mugi playing the keyboard! 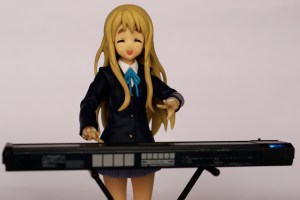 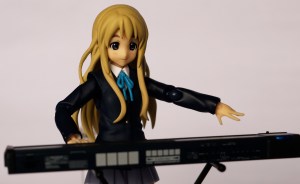 Mugi looks much cooler with a keyboard in front of her. However since the keyboard is longer and wider, it would take up much more space than Mio or Yui. 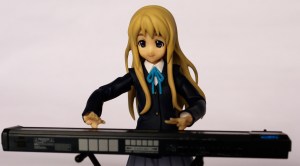 You can only do so much with Mugi alone so pairing her up with the rest of the band brings a whole lot of fun to her.

Mugi uses similar bodies to both Yui and Mio so as a Figma, the articulation and aesthetics would be the same. Mugi’s hair is sculpted nicely and her keyboard has all sorts of little details that makes it pop visually. She is not a Figma I would rush to pick up but rather something that I would get to complete a set. That being said, Mugi is a solid Figma with an interesting instrument and if you  own any of the girls, go ahead and get her! For those on the fence, I wouldn’t say much except that displaying Mugi takes up a fair amount of space while looking impressive.

As always, thanks for reading. 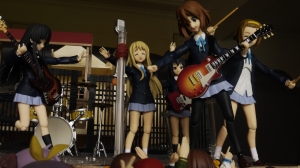