With the previous 4 girls reviewed, it’s finally time to take a look at the club president herself, Tainaka Ritsu! Fortunately, Figma Ritsu is way easier to get than the Nendoroid version so I had no problems completing the band. With that said, let’s take a look at Ritsu! 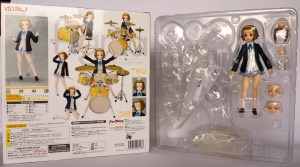 Ritsu comes in the larger box for bigger Figmas. You will notice that the left side of the blister containing the drums are empty but that’s because I removed the drums and was lazy to place it back in for the photo. 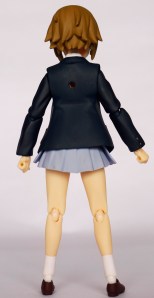 Out of the box. First thing you will notice is the difference in Ritsu’s costumes compared to the other girls. Her jacket is open and there is an obvious chest joint across. I suppose that is to allow her to play drums better? Other than that, it’s typically smooth Figma joints and the deal is more or less the same as the other K-On members.

Ritsu’s hair is surprisingly detailed despite the length and the sculpt is rather elaborate even though it’s at the back which you probably will never see. 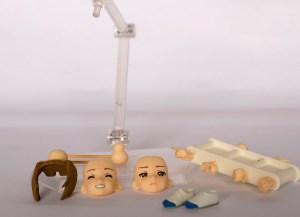 Ritsu comes with the usual hands tray, Figma stand and 2 other face-plates. Indoor shoes, drumsticks and the swollen head bump hair piece is also given. I was rather disappointed that the hair let down part was not provided considering the Nendoroid had it but it’s something I can live with. Ritsu also obviously comes with her drum set but more of that later. Now let’s explore the expressions! 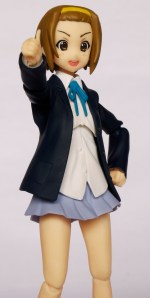 Ritsu comes with the confident smiley face and also the embarrassed grinning one.

She also comes with a crying face and for that, you can also switch on the fringe with the bump to make it look like she just got hit on the head by Mio. If one bump is not enough, there’s an option for 2! 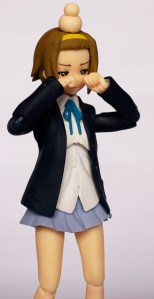 It’s little things like that which brings out the character out of an action figure. =) Let’s take a look at her instrument now, the really big drum-set!. 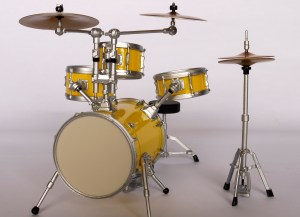 The drums follow the same pattern as all the previous K-On instruments (maybe with the exception of Mugi’s keyboard) and has all the basic colour schemes down. The black bits are all painted in crisply and that would precisely how a drum-set, stripped down of all the labels, printing would look. The yellow seems slightly too pale for my taste but overall, for something this big, it looks good to display it with the Figma.

A further look at her toms and snare. The connection parts for all 3 lock onto the bass drum and so do the cymbals. It can get loose from time to time so just pop it back into the connecting holes.

The hi-hat is moveable and also the pedal can move a slight bit. The seat is as basic as you get but all the detail is pretty nice for something that is an accompanying accessory.

Ritsu can sit and play the drums without using the Figma stand. That’s a really good thing because with the space the drums are taking, if you got to add in a stand at the back it will take a ridiculous amount of space. 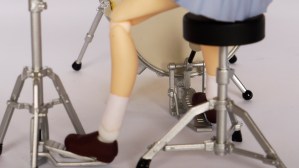 Ritsu’s feet can also be placed at the pedals which is fantastic and it looks like she is really playing the drums! 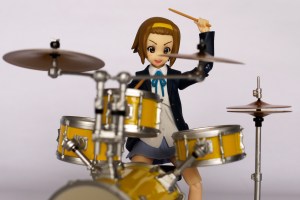 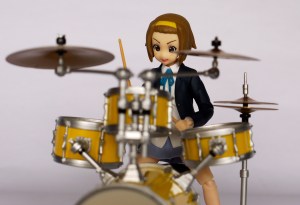 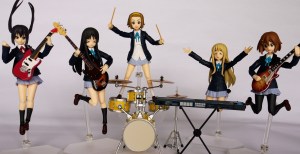 Ritsu is a decent Figmas with all sorts of fun expressions. However what really sold me on this purchase would be the drums. Although simple, the paintwork is done really nicely and little touches like moveable hi-hats and pedals are big wins. The drum-set can also be used with other Figmas to make them more kick-ass and if you have the entire K-On band, you can recreate some rocking’ moments with your favourite Figmas! If you’re getting Ritsu, you most probably already have or are getting the entire band since nobody displays a drummer alone. Overall, the K-On figmas were really fun and all of them has the character appropriate expressions. If you have all 5, you can practically re-create almost every scene from the Anime and have oodles of fun doing it! Ritsu as a standalone figma is fun but when you add in the drum-set, it becomes well worth the price! Get her! And get all the 4 of the rest as well!