Madoka is one of those Nendoroids that I knew from the moment it was announced that I would need to get it. It is really adorable and although I had little affection for her character in the Anime, once Madoka was translated into Nendoroid form she became irresistible! 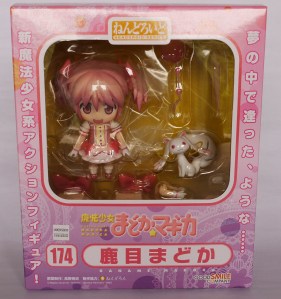 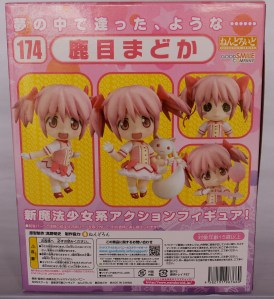 Madoka is the main character in Puella Magi Madoka Magica the Anime and boy what an Anime it was. I shall not spoil people who have not watched the Anime but seriously, what are you waiting for? Madoka comes in a nice colourful box with a pink to purpe shades in a gradient and also magic looking logos adorning the box.

Madoka comes with the arm-type stand instead of the skirt stand normally given for Nendoroids. 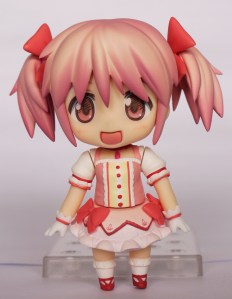 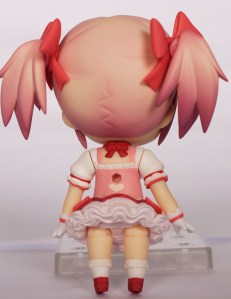 The front and back of Madoka. First things first, I love bows on my Nendoroids! Much like how Al-Azif had bows all over, so does Madoka! The pastel pink blends so nicely with all the white, bows and frills of the costume. Her hair also has a white gradient shading into pink. 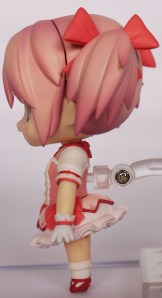 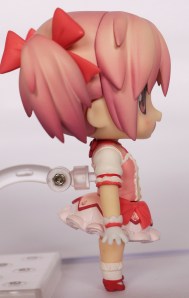 Side view of Madoka. It’s nice how her skirt pops up at the back giving a poofy feeling to her dress. 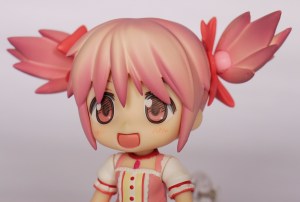 Her pigtails are also moveable as they are on ball joints. =) 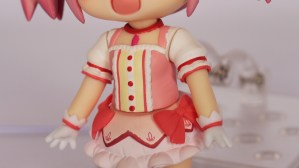 As much as I love the colours of this Nendoroid, the paint job could be done much better. Just look at how much bleeding over the lines have. The neck band, the shoulders, the skirt lines. I’m so accustomed to Good Smile’s crisp painting and seeing so many flaws in such a small area is rather jarring. =(

Madoka comes with a large number of accessories. first off, QB (Kyuubey, Quebey) is included with a spare hanging body, Madoka’s bow and arrow, 2 hands, 1 bent leg and 2 face-plates. 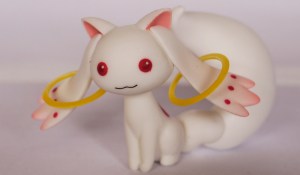 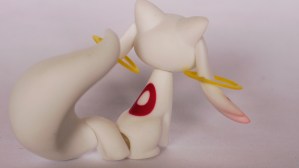 QB is moulded in white plastic and has gradual pink shading on his ears. I like how the hoops on his ears have the floaty effect. Although QB is small, he has 3 points of articulation, his head can twist, his tail has 2 points of swivel joints so you can pose him standing with his tail swishing back and forth. Just the fact that QB is included with Madoka greatly increases the value for me since he was instrumental in the Anime. =O 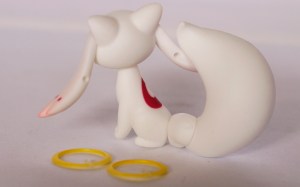 The hoops plug into tiny holes at the back of his ears. These hoops are very loose and any-time you fumble with them, they are liable to fall off. After a while it gets irritating so be patient and take your time with it. 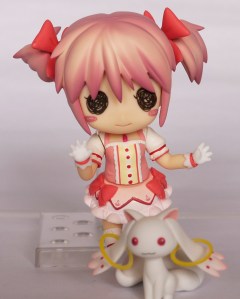 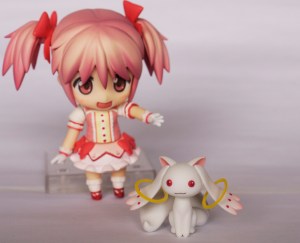 Other than her smiling face, GSC provided the face-plate of Madoka when she drew her own costume in her notebook. It’s very charming and I can definitely see myself using it on other Nendoroids for the fun factor. 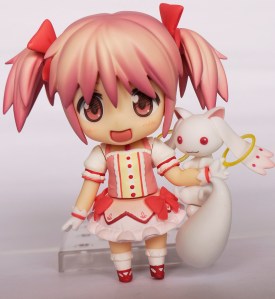 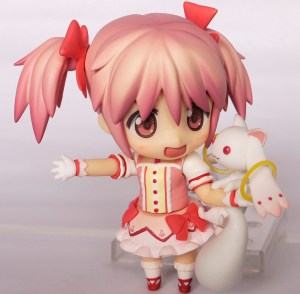 Madoka is already plenty cute as she is but when you plug in QB the charm factor goes through the roof! This will probably how I will ever display her in my collection since the whole thing is just so adorable! =3 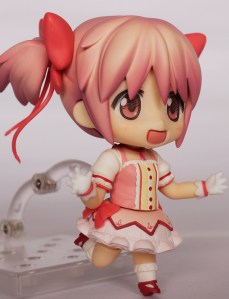 When you switch in the bent leg, you can also mimic the running pose Madoka did in the opening of the Anime. =) I have also switched the bows on her head for the other one with the hanging threads. I like the flowing bows more than the original one as it’s much more dynamic and has motion! =) 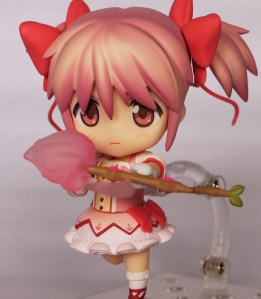 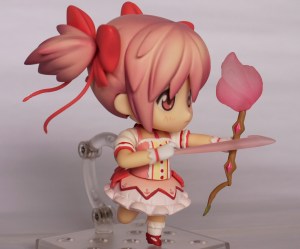 The bow and arrows are simple but nicely sculpted and painted. It’s a snap to put all the parts on and they stay on pretty well. However since the bow is heavy, if you fiddle with the hand too much it will drop but nothing too complicated. 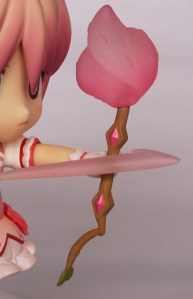 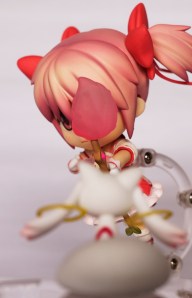 For kick-ass poses like this, the arm stand really comes in handy. 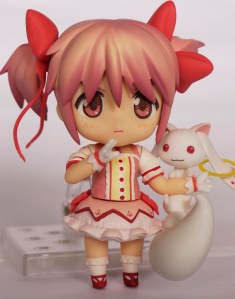 Since GSC announced her, I went ahead to pre-order straight off. I even pre-ordered the Wonder Fest Limited School Uniform Ver, Madoka. Does this mean I’m a sucker for the pink-haired Mahou Shoujo? No, my favourite girls from Puella Magica are Mami and Homu Homu so what made me get Madoka? It’s purely because of how cute she is as a Nendoroid! She has a fresh new colour scheme different from the army of school-uniform Nendoroids and although the painting could be better done, there is hardly anything I can complain about this figure. The sculpt is excellent, the pastel colours are really inviting and QB is also included makes this a must-have for me. I suspect that since the Anime was wildly popular, Madoka might inflate in price like how Miku, Yui and Mio did before the re-releases so now would be a good time to get your mitts on her. Madoka really makes me look forward to the Homura and Mami Nendoroids coming my way! 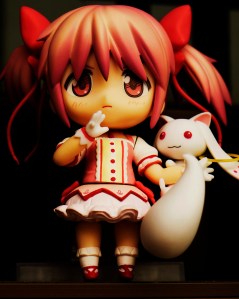