Kamen Rider Exceed Gills is the first ever S.H. Figuart that I own since I was really drawn to the suit’s design and also because how easy it was to find him. Almost everywhere has Exceed Gills on sale and some even have him on a discount. That can’t mean well now can it? Let’s take a look at Exceed Gills! 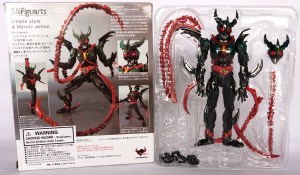 First impressions are that he looks really good. I like how primal and wild his design looks and since it reminds me of Kamen Rider Amazon, it was an obvious get for me. I also like how cool the Gills Stinger (red tentacles) looks attached on the box art. 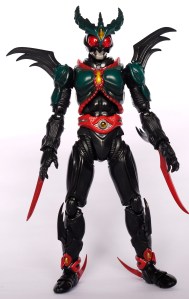 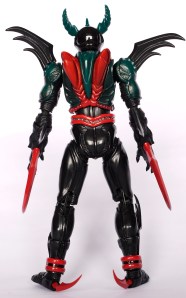 Exceed Gills is really pointy with all sorts of spikes coming from his shoulders, hands and shins. Clear yellow plastic was used for his head jewel and belt and delicious red compound eyes shine through. The two red pieces on his back is rather loose and tends to fall off when you’re moving the figure. The spikes on his heels also do not come pre-attached so you got to pop them in to compete the figure.

I really like how the red brings out the power and deadliness of Exceed Gills. That was why I opted for Exceed over normal Gills as he just looked much more lethal and savage with the red spikes. The shoulder is moulded on the arm and not on a hinge like most shoulder armours so articulation will be slightly hampered by that aspect. Overall there is a very organic, savage look to this SHF. Awesome. 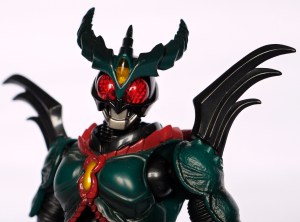 The compound eyes are exactly what got me into S.H. Figuarts and Exceed Gills has a really delicious pair. I also like how obvious the clear jewel on his crest stands out. You can also see how well the shoulder armour was sculpted and although I think the chest is slightly too big, it does a certain girth to the overall aesthetics.

Exceed Gills comes with the Gills Stingers x2 which comes seperated in 3 pieces each, 3 extra pairs of hands and an extra screaming head. 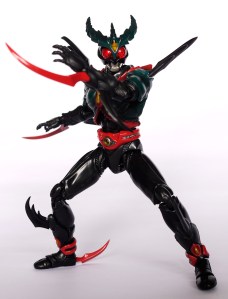 So far as things went, I was really pleased with Gills. However as I started posing him, it sunk in why the price tags were always so low for such a mean looking SHF. First off, the spikes are loose. Seriously so with the shoulder spikes being the worst. They tend to pop off whenever you’re moving the figure so it becomes a chore to pose him. I got around that by putting in blu-tack into the grooves holding the spikes but that’s something that shouldn’t be such a big problem in the first place. Secondly, his ankles and feet are really flexible, to the point that they are too loose to support him when he is standing. As much as I dislike die-cast feet as they are hard to twist around, I think in Exceed Gills’ case, he would really benefit from it. All that being said though, I think he looks really good in almost any pose so let the photos roll~ 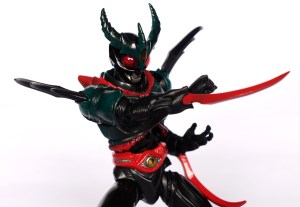 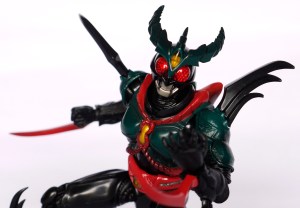 The red spike on both arms can be removed but since I like them in more, I left them in for the entire photoshoot. 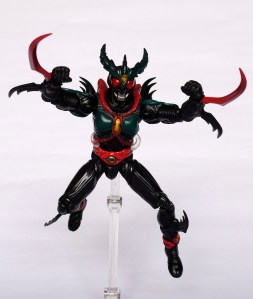 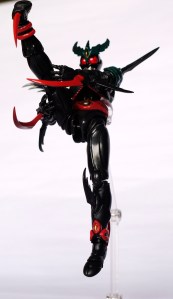 I used to be able to do the Gills’ Rider Kick but for some reason this time, I just couldn’t get him to replicate the box art exactly but still if you have enough patience, it can be done.

To switch his head, just gently and firmly pop off the current one and insert the preferred head. 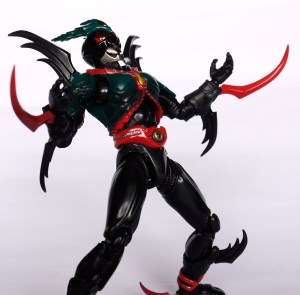 His roaring head looks really cool and it would be the option I would choose to display him with. The head would look much better if the inner part was black instead of all silver but that’s a quick fix with paint markers so it doesn’t bother me that much. 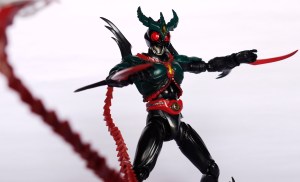 Gills Stingers! To attach it, just remove the red parts on Gills’ back and shove the stingers into the hole. The Gills Stingers, as impressive as they look, is a major failure. They are hard to attach, prone to dropping off at the slightest touch and incredibly hard to pose. The easiest way to do anything with them would be using the Tamashii stands but for those without any, good luck in doing anything useful with the stingers. =(   This is one of those things that sounds great as an idea, but when executed falls flat on its face. 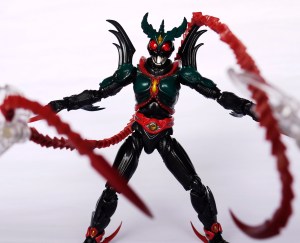 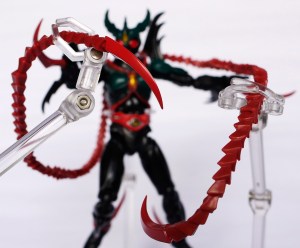 I really want to love the Gills Stingers but would I display them like this, heck no! It would take up a tremendous amount of space and stands and since Gills is loose enough as it is, he will probably fall flat on his face whenever the shelf gets moved. Thanks Bandai for including it but seriously, it could be better. 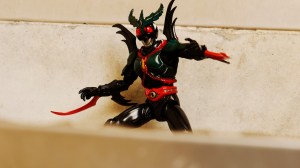 Kamen Rider Gills looks really fantastic. He is probably the most feral looking rider that’s released, (at least until I get my Amazon) with his spikes and screaming head and that was what moved me to buy him. However he disappoints in the posing department with loose ankles that can barely hold his weight and when you factor in the loose spikes, troublesome to pose stingers, it doesn’t seem all that great. Do I regret getting him? No, since I got him for his design and that’s aces. However if you’re looking for playability and durability over aesthetics in your S.H. Figuarts, skip over Exceed Gills as I’m sure his posing and loose parts will drive you up the wall in no time. 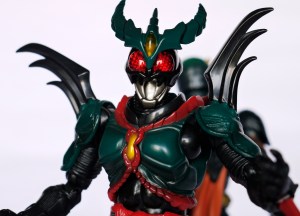