Suzumiya Haruhi. If you have never heard of these 2 words before, you should just click on the back button and go watch the series. Haruhi is the main character in the Melancholy of Suzumiya Haruhi and although there might be better Anime out there, M.O.S.Haruhi remains one of my favourites. Here’s the review for Figma No.002, Suzumiya Haruhi School Uniform ver.! 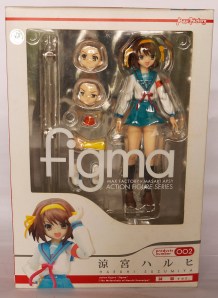 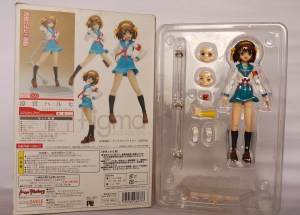 Out of the box.

I like how the hair is sculpted with some motion to it and also how the skirt rides up slightly. Now that she is stationary, it looks strange but I’m sure when Haruhi strikes a pose, it will look much better. The Figma looks really nice and for some reason, I think she has fantastic proportions.

The ribbons on her hair and uniform also have a fluttering effect sculpt. 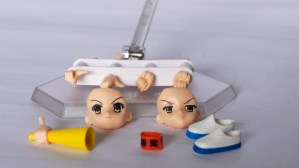 Haruhi is incredibly easy to pose since she has short hair and nothing blocking her articulation. Since she has long sleeves, the joints are not that obvious and it’s a real joy to fiddle around with her.

To swap the armband, just gently slide off the arm from the peg at the shoulder and switch the armband. Or you could be overkill and attach both armbands! 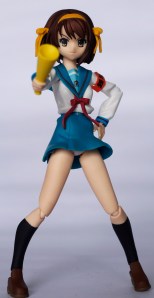 A serious and disgusted face is also included with Haruhi which brings all sorts of possibilities to your posing. You can just attach the cone by switching the hands.

If you have never watched the Melancholy of Suzumiya Haruhi, there should be no reason whatsoever to get this Figma since all of the accessories provided aren’t that interesting and the boring uniform doesn’t jazz things up enough. That being said, it’s a solid Figma, easy to pose and no loose parts. If you have watched Haruhi and was wondering what to get, start with this first! It’s easier to find than the Haruhi Nendoroid/Figurines and much more playable than most Haruhi products in the market. Up till now this is my favourite Figma and unless Max Factory comes up with something mind-blowing, it will be hard to dislodge Haruhi from her position.