I have reviewed all the Figma Haruhis that I have and this should be the last Haruhi I will take a look at unless I manage to get my hands on the limited Haruhi or Maxfactory comes up with even MORE variations of Haruhi. =O    So without further ado, let’s take a look at Haruhi (光陽園学院) ver.! 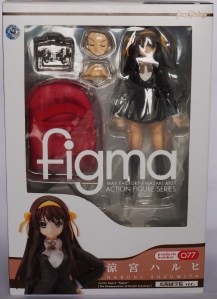 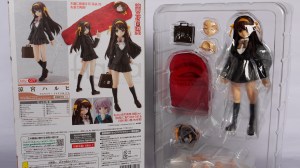 Haruhi freed from her plastic prison~

Compared to Haruhi’s original uniform, I like the Kouyou one so much more. The darker colour overall is more elegant and the long hair just fits Haruhi so well. Aesthetically this is my favourite rendition of Haruhi and coupled with the shading on her hair, this is a really beautifully understated Figma.

Her hair is also sculpted swaying towards the side and it looks much better than static long hair. 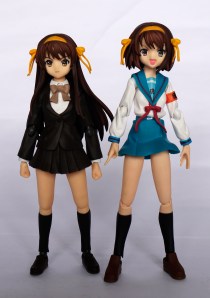 I was really pleased with the Figma until I compared it with the original Haruhi. Why is there a height discrepancy with both Haruhis? And it’s not a tiny difference, oh no…it’s really obvious regardless of how you view it and boy that was just disappointing….As much as I liked the Kouyou ver, I will always think of her being so much shorter than the original version and that just makes me sad. =(  Getting away from the height issue however you can see that Figmas have evolved since then and it’s most obvious at the back of the thighs. Cool~ 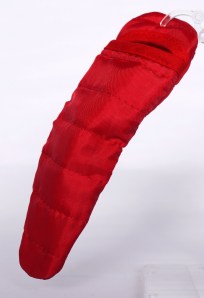 The sleeping bag is made of real fabric and supposedly you can squeeze the Haruhi Figma into it. Why a sleeping bag? Watch the Haruhi movie to find out! 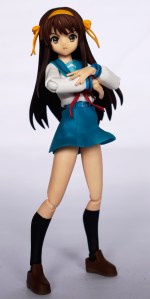 The new head is compatible with the first Figma and vice versa. Interesting and you can have a heck load of different locks for Haruhi if you have all of them.

I really like how Haruhi looks with her bag and coupled with the serene expression she has on, that was the main reason I got her. 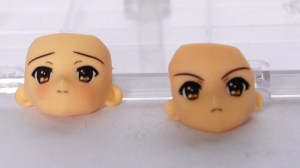 Remember the Nagato face-plate? It’s the one provided with the accessories and it’s the one of the left. If you wanted to use it on Haruhi, no dice because it’s meant to work with Nagato hence the different mounts. =(  Now i gotta go find my Figma Nagato.

You can supposedly squeeze Haruhi inside but I took the shortcut and just slided her head into the bag. 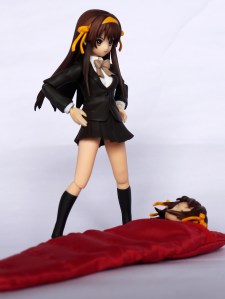 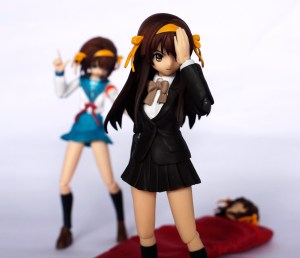 Considering that I have 4 other Haruhi Figmas, does the Kouyou one feel like an extra? Hardly so. I went into this purchase loving the look of this Haruhi so I got what I wanted and although there was the obvious height issue, everything else was really sweet and I can hardly regret getting her. Kouyou Haruhi is different enough from my other Haruhis to be almost a different character and if you really like this look, go ahead and grab her! Haruhi really does look gorgeous with long hair. =3 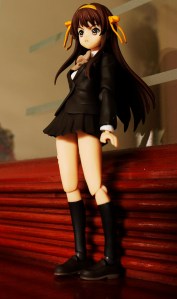