I have reviewed the Nendoroid Madoka and now that I got my Figma, let’s take a look on how it stacks up to the Nendoroid! 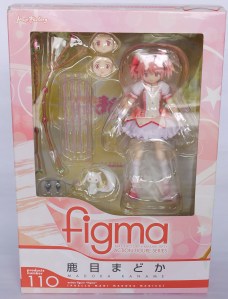 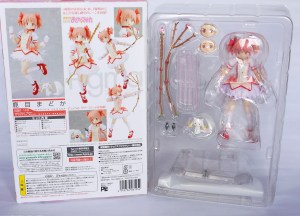 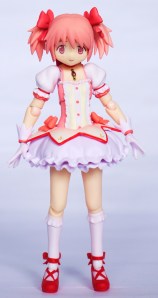 Madoka is really petite and when you hold in her in your hands you can feel that she is just so much smaller than normal Figmas. Madoka’s mahou shoujo’s dress has also been nicely re-created with all the bows and frills which is really sweet. Only thing I noticed would be the arm joints being rather obvious but other than that, Madoka looks super sweet~

From the side you can see exactly how blown-out the skirt really is. Since the skirt is really puffy, Madoka can’t really raise her legs that much since the part obstructs the movement. Madoka is rather hard to balance without a stand as well since her feet is really tiny and the balance is hard to strike. 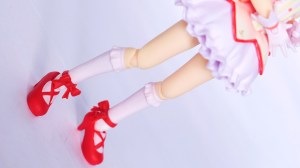 The bows on her ankles aren’t fixed and can be rotated around. cool touch! 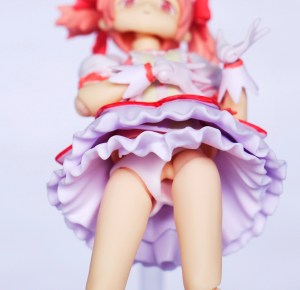 A pantsu shot of Madoka. The point is not to upskirt Madoka however but to check out her frilly skirt. As you can tell, there are 2 layers for the skirt and you can actually spy her shirt in between the cracks. =D

Same as the Nendoroid, Figma Madoka has moveable hair parts which you can twist around to your heart’s content.

The Figma has lots of little details but the accessories are no slouch as well. Madoka comes with 2 bows (open/closed), 2 grief seeds, 2 other face-plates, 4 arrows, Figma stand and a Kyuubey (QB)!! And also the hand rack, which for some reason I missed out.

So far Madoka is really impressive until I saw the QB. Oh man what the heck was that? It looks crappy and cheap. It’s frigging tiny to boot. I can’t really remember if QB was that small in the anime?

Left for Nendoroid Madoka’s bow and right for Figma version. The Figma one is better in the aspect that there are more details and looks more detailed.

The tiny QB to Madoka. Since QB can’t tilt his head up or anything, he looks really static in most photos.

Trying to re-create the running pose from the anime opening. I really dig Madoka’s red shoes and it reminds me of Dorothy from Wizard of Oz. Kansas here I come~ 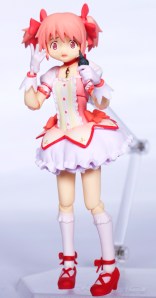 I switched out the happy face-plate for the horrified one. I think Madoka is the first one I have with such a disturbed face and there seems something wrong with a figurine having such a shocked expression. =S

Madoka made up her mind and now gets ready for some butt-kicking! Her determined face-plate is the highlight for me and by far my choice when displaying Madoka.

It’s important to note that the arrow holding hand is packaged separately and not in the hand rack. So DON’T lose it or your Madoka can’t shoot arrows. =( Anyways I thought that Nendoroid looks really awesome shooting stuff but the Figma manages to look even better. Seriously look at how cool Madoka is in this pose. I don’t really like Madoka in the anime but the Figma really endears herself to me. =) 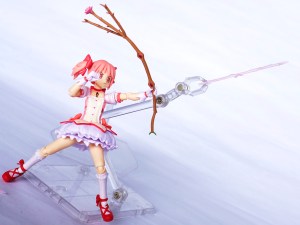 Shooting into the sky~

Madoka comes with 4 arrows. FOUR. Maxfactory conveniently missed out stands for the other 3 of the arrows so I had to use some Tamashii stands to have all 4 arrows swooshing about. Looks really messy in the picture in the end. =( 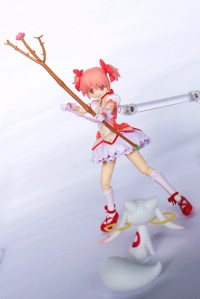 Take that QB! (I used the Nendoroid QB for this as the Figma one is pathetic)

Comparison between Nendoroid and Figma. The Nendoroid’s hair colour differs from the Figma and has white shading. I think the Figma is more anime accurate though.

I really think the Figma exceeded my expectations and really there’s nothing bad with this figure. The sculpt and paint is nice, her accessories are interesting and she is really fun to play with. Only issues I have would be the crappy QB and the lack of stands/holding parts for the excess arrows. With Madoka bought,  I’m really looking forward for Homura’s release and see whether or not Homuhomu can step up and overtake this solid release. 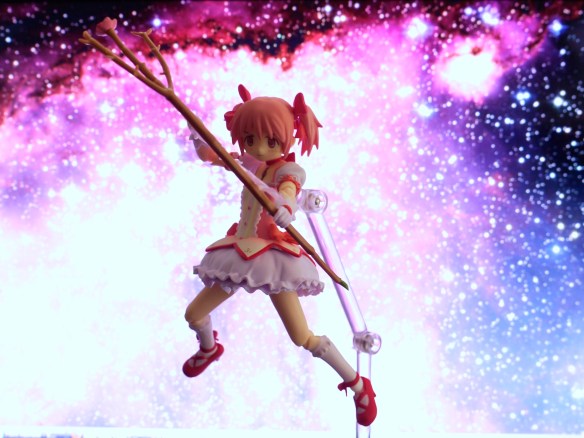 as always thanks for reading!