Lucky Star was an anime that I really didn’t get in the first few episodes but as the series progresses, it became really fun and it’s the constant references to other anime/otaku habits that really stood out for me. Not forgetting the real landmarks that were included in the anime as well! So I got my hands on some Lucky Star figmas and Konata will be the first to be reviewed!

No Konata doesn’t come with the beam effect part, it’s from Ultra-Act Ultra 7. =3 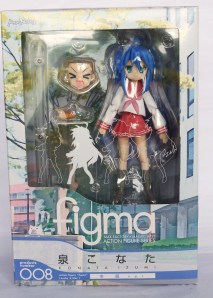 Konata is really early release, the 08th in the Figma line-up so I was pretty lucky to get it at 2000Yen unopened. =)

It’s nice how Maxfactory kept the bobble-head proportions of the anime and reprised it into Figma and yeah it looks cartoony, but it’s true to the series and that’s something I really like. The girls from Lucky Star doesn’t have the most interesting uniform but at least it’s not blue coloured somewhere! Konata’s hair is blue however and it’s really long. It’s sculpted alright with all the locks flowing but it’s just 1 piece of hard rigid plastic. I foresee some articulation issues with the hair now. =( 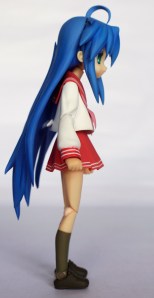 From the side you can tell that there’s one strange piece of hair attached. You can pop that off to poke the Figma stand into her head instead of the usual back. This hair piece falls off really easily with the slightest touch for mine so I gotta be careful with it.

The lines of her uniform are alright but there’s some bleeding here and there around her wrists. Still nothing that distracting and only if you look closely.

Konata is smooth to pose but you got to have the stand. If not the Figma will just keep falling due to her heavy hair.

I switched in the >o< expression and it looks more Konata like this. =3 It’s worth nothing that her little curl of hair at the top is rather stiff and will scratch her fringe part whenever you remove it.

With choco cornet on. “Don’t take my cornet!”

I watched the anime and I like Konata as a character. However it was a long time ago and now when I play with this Figma, it’s really not that fun and to me kinda plain. I guess since it’s an older Figma, when compared to current stuff, it does feel slightly lacking? I’m really ambivalent about this release, not exactly sad I got her and not too happy as well. It’s ok for a Figma, but don’t get this and expect your mind to be blown.