Takra Miyuki is the bumbling, super smart and all round moe character in Lucky Star. Also know as Miwiki by Konata, she is the final Figma to complete my Lucky Star quartet in my collection. 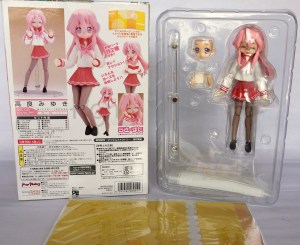 I can’t really remember whether I have said it before but I really like the dancing patterns at the front of the Lucky Star Figma boxes. Depending on your Figma, the corresponding image is bolded in white. Nice touch! =) 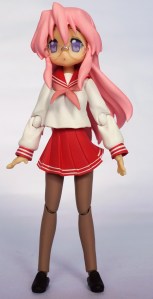 Miyuki has really nice flowing locks and her sculpt is way more interesting than Konata’s hair. There is a large piece of hair at the back of her head which is removable to plug in the Figma stand.

From some reason, my Miyuki’s glasses aren’t really straight and it’s kinda obvious when viewed from certain angles. However since you can’t really make it out straight on it’s not too bad. 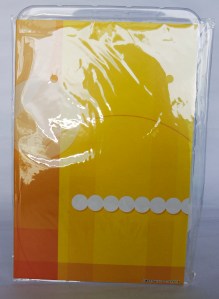 Miyuki only comes with 1 extra face, a book, hands rack and the Figma stand. She has an extra piece of paper which is a background for all the Lucky Star Figmas. I didn’t open it as I wouldn’t use it anyway.

Miyuki looks really doe-eyed with her standard expression and yes she is also cute for a Figma. With the shy face-plate put in,, she looks even more bashful. =3 I think the Figma really translated her character well into 3D and despite Miyuki being my least favourite girl in the show, I think she is my 2nd favourite Lucky Star Figma.

The book came pre-painted so no need for stickers this time. I have to rant here though. My Miyuki came with extremely loose hands that hold the book and it was hell trying to hold the book. It took me like 10 minutes to get it in without dropping and seriously it was horribly irritating. 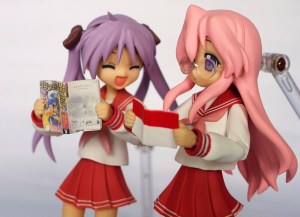 Miyuki is a really nice Figma and even though I had little affection for the character, the Figma is nice enough for me to do a double-take. However the same issues of minimal accessories and boring uniform plague Miyuki as well. For casual collectors, there really is nothing much to draw you in and even for Lucky Star fans, unless you’re a Miyuki fan, just pass by this release.