I got my HMO Miku for quite some time and just recently took her out for an outdoor photoshoot. Now let’s take a look at the Nendoroid itself! 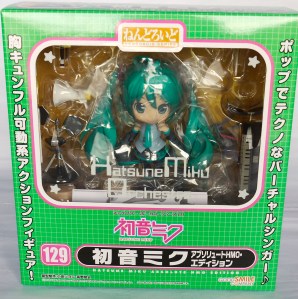 HMO stands for Hatsune Miku Orchestra, which was a CD released by YMO (Yellow Music Orchestra) and the CD cover featured this Nendoroid, sleeves and all. So we got an adorable Miku which looks Miku-ish but still rather different from the original~

HMO Miku is super-moveable and you can see from the vast amounts of joints on this Nendoroid. Instead of giving you a mountain of different hand and leg parts, there are now instead joints on this Nendoroid to give you even more posing possibilites. The arms have 4 points of articulation and the legs have 2. Impressively even the twintails has a joint. =) I really like how Miku was sculpted, it’s very cartoony cute from the little tuft of hair at the top to her expressions. The hair is also given more definition and shape as well.

You can also see the 01 clearly printed there. It’s a different font from the original Miku Nendoroid. Since Miku is super-poseable, she should be really fun to move about and pose so we shall see how it goes as the review progresses~

Miku comes with the arm-stand to display her anyway you want to! 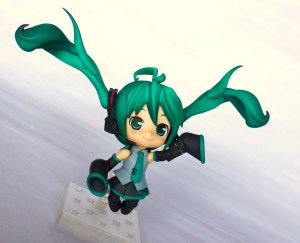 Ok time for some complaints. First off, the peg doesn’t fit snugly enough for Miku. The hole at Miku’s back is too shallow and the peg can’t go all the way in. So Miku is prone to fall off the base when you’re fiddling about. Secondly, Miku is REALLY loose. Since there are so many joints on such a small body, it’s bound to happen. The worst offenders are her left arm and twin tails. Thirdly because of the joints, Miku’s legs can’t really support any poses without the stand as the legs bend under the weight. You can use the twin tails to offset the balance but then it will fall out somehow. =(

Despite my rant about the Nendoroid, I was appeased when I saw the crazy amount of accessories. Amano Toko has plenty of stuff but Miku just blows her away with the size and amount of stuff. She comes with her HMO glasses and headphones, various hand parts, an electronic drumset, 2 keyboards, a recorder (for Len), 2 leeks (I lost one during my nature photoshoot), loudspeaker and the 2 face-plates. Wow…that’s a lot of playability right there. 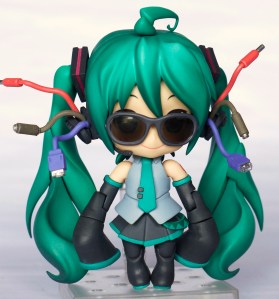 Let’s get Miku all glamorous~ She looks slightly ridiculous and if it were on anything else but a Nendoroid it will look seriously strange with all the wires poking out. BUT being a Nendoroid, she looks adorable and the sunglasses just ups the cute ante. I will be displaying my Miku like this since it’s so different and funky~

If for some strange reason the sleeves don’t appeal to you, Miku has normal hands to please you as well~ However the hands don’t fit on tightly and are prone to fall off.

GSC has also kindly provided a holding sleeve hand which can be used to grab the leeks. For what reason you might think. well scroll down!

If you have leeks, you got to hit something! So Miku comes with an electronic drum-set to bash her leeks with. Pity I lost 1 leek so now Miku only has 1 leek-stick to drum with. Doh~ On a side note, for those people missing out on a Ritsu Nendoroid (me included), just use Miku for your K-On drummer! At least that’s what I’m doing until I get a Ritsu!

If drums are not your thing, Miku comes with 2 keyboards! Not just 1 but 2, why? Because she is Miku! But also because it was in the PV, although for like only 3 seconds~ Go watch the PV, if you don’t have cuteness overload, I commend you! 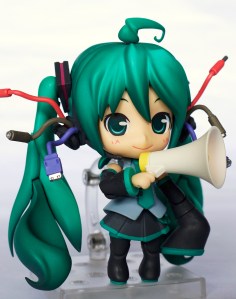 Miku also comes with a loudspeaker, so you can re-create Love is War Miku, Nendoroid version! 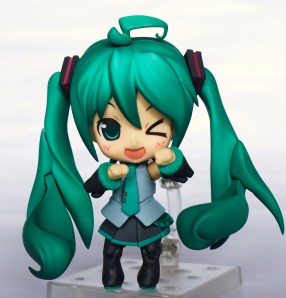 I’m not really sure about the winking expression, but I know for sure the | ω | expression  was in the PV. Both are really cute and can easily complement Miku. On a side note, Miku can’t hold the recorder and I used blutack to hold it in place. And yes, I removed Miku’s locks from the right picture for a different feel. =3

Comparison of the 2 Mikus. I like HMO’s proportions more compared to the original. And also look at much better HMO’s hair looks~ Still, both Mikus are adorable…. uhwaaah >o<

Vocaloid band! Eh we seem to be missing a vocalist?

If you like Miku, most likely you have her already. So for those looking for a reason to get HMO, she has plenty of accessories and thus, insane playability. The good thing is that since she has so much stuff, she can easily share it with other Nendoroids, giving her even more friends! HMO Miku also looks delightfully sweet, and you can’t help but smile when you see her. =3 For those looking for a reason NOT to get her, well…she is really loose and frustrating to pose sometimes. If you can get over loose and falling parts and survive to the accessory bit, get her! However if you prefer simplicity in your Nendoroids, you might want to skip this release. =3