Sorry haven’t been really updating much recently, well that’s because I’ve been attending AFA, held in Suntec City Singapore! Being Singaporean, it’s a crime not to go considering how many of our overseas friends make the effort to attend. So attended I did and let’s look at what AFA had in store for us this year! 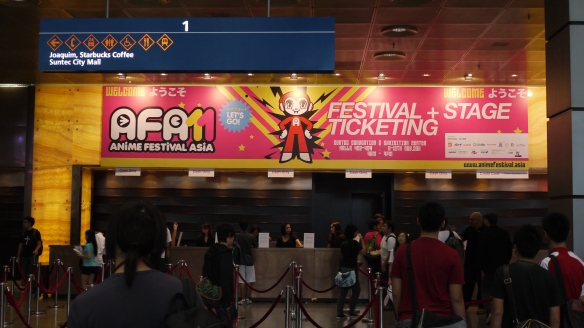 This post will focus on the event itself, such as the programs and line-ups. For full photo coverage, head over here. If cosplayers or merchandise are more your thing, feel free to click Cosplay or Merchandise. =D

AFA was split into 2 areas, stage and festival grounds. Festival mainly comprised of shops selling merchandise and stuff, while stage were where all the events were. You could just get festival tickets or obviously go for both stage AND festival tickets! 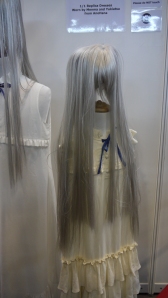 For more pictures on the Festival grounds, refer to the above link (on full photo-coverage)

These are all stage events and Saturday’s one are different from Sun’s one. Wooh! 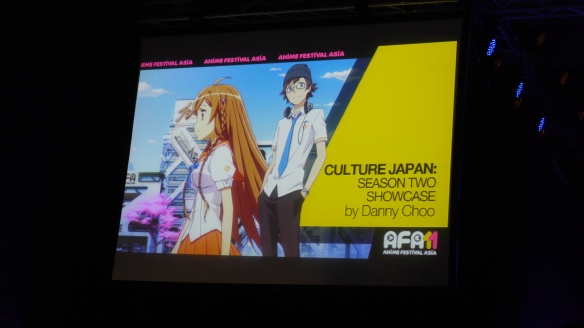 We were first treated to a Culture Japan Showcase by the man himself, Danny Choo! 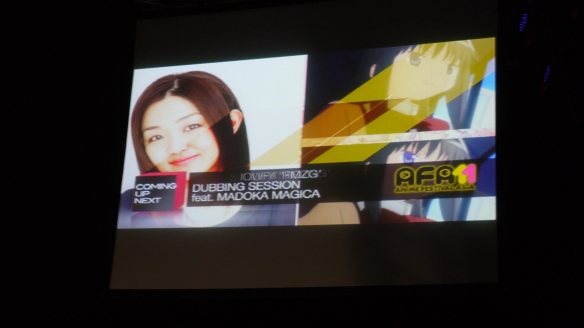 Chiwa Saitou-san was then invited on stage to do some dubbing for Madoka Magica. Saitou-san was notably the Seiyuu for Homura Akemi from Madoka and Hitagi Senjougahara from Bakemonogatari. When she was doing the dubbing, my hair stood on ends, man it was emotional.

Next a Fate/Zero showcase with the producer Iwakami-sensei. Considering how mind-blowing Fate/Zero has been this season, I was really awaiting this. To cap it off, LiSA even came out to sing the opening to Fate/Zero. Fantastic! 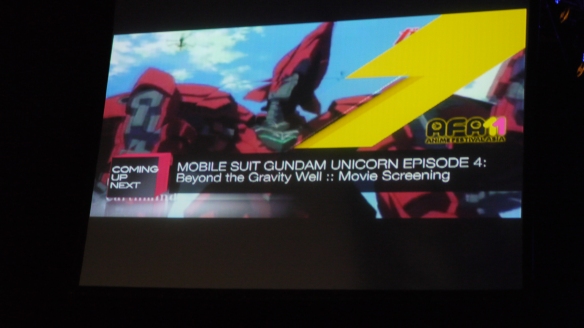 Next was the screening of the 4th part of the Gundam Unicorn OVA. Being a UC fan, I was really looking forward to it as well. Look at the Shamblo!! Well I shall not spoil it for those who have not watched, since AFA had the advanced screening but it is not too bad. =)

Following this, the stage was closed to prepare for the Anisong concert later. I went for that as well but since photography wasn’t allowed, I just cheered my heart out instead. We had Sea*A, Ichirou Mizuki “Aniki”, LiSA and FLOW. Boy it was mind-blowing!!! Fantastic!! Z!! On a side note I also attended the Miku concert on friday and even though I am a Miku fan, I found it hard to get pumped up over a hologram. Eh… =3

I came slightly later on Sunday as I was totally exhausted after the concert which ended around 11.15pm Singapore time. Therefore I missed the Madrock scramble 2 screening and also the director dialogue. I reached the stage around 11.30 expecting the Anohana showcase at 12pm. Turns out I got the timings wrong and Anohana were at 12.45 instead. So I sat through the AKB48 appearance but didn’t take any snaps. Not being an AKB fan, it’s was ok but the highlight for me gotta be Aniki coming out as a surprise guest. Z!! (you say it as ZACK and point your hand forward!)

Then time for the Anohana showcase with all the important people making this wonderful anime doing a short panel with Q&A. * SPOILERS*

Someone asked “Why did you make Yukiatsu crossdress as Menma?”

Scriptwriter Okada-sensei’s reply : “It’s because Yukiatsu was feeling too strongly about Menma, and only through assuming her form can he express it” Or something like that~

Then appearances by Anisong artistes! Followed by this it was the Regional Cosplay competition which I missed since I was out taking photos of other cosplayers. The night was followed by Anisong concert day 3, featuring the artistes above and Milky Holmes. I screamed myself hoarse and now the day after, I can feel my calves aching from all the jumping. Still it was well worth it and I had a tremendous blast. Look at the queue for the concert!!

I had so much fun this year at AFA and now that I know and watched significantly more anime compared to last year, I was able to enjoy it so much more. Last year had Anisongs as well but I didn’t attend it due to budget issues, HOWEVER this year I did not make the same mistake and went for Anisongs! If you live in Singapore or in the neighbouring countries, why not drop by for a few days if you’re an anime fan? If you need a friend, I’ll be yours! It’s such great fun! A big thanks to all the organisers and artistes which made such a great event! 本当にどもありがとうございます！! See you next year!!