The 2nd release from the Gokaigers, the 35th Super Sentai team, is Gokai Blue, Joe Gibken! Joe is the first mate of Captain Marvelous and despite being a man of few words, he is as cool as the blue he sports~ 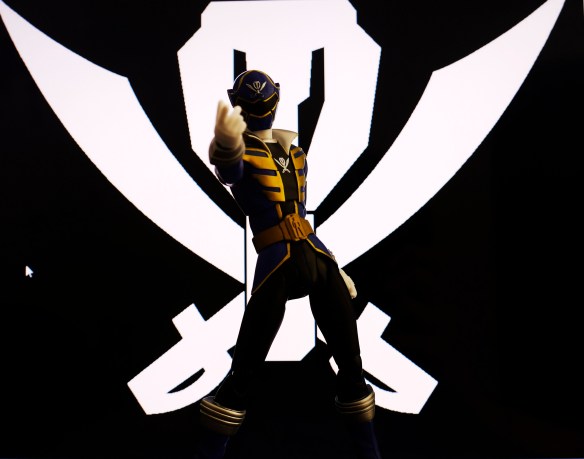 I managed to snag my Gokai Blue with the 1st release bonus of the Gokai Darin on Ebay which was pretty lucky. The box also follows the same pattern as Red’s with the reflective paper and gold accents around. Gorgeous packaging! 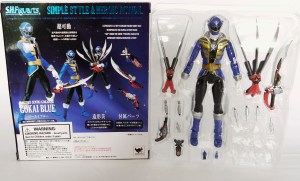 Joe is a swordsman and yes he comes with a truckload of swords. =3

Since Gokai Blue uses the same body as Gokai Red, there really isn’t much difference. Blue’s proportions are pleasingly slim, the joints are rather obvious especially at his arms and the puke-gold colour is back and manages to look worse on blue than it did on red. =(

Boots also has nice creases for a more realistic feel.

In my opinion, Blue has a meaner looking visor shape compared to Red and his head sculpt looks so handsome! There’s some slight pain fade on the Gokai emblem on the front of Blue’s head but it’s a manufacturing defect more than a real issue. Blue also has the pin moulded on his collar like Red did. =)

Side by side comparison between both Gokaigers. If you got 1, you got all? 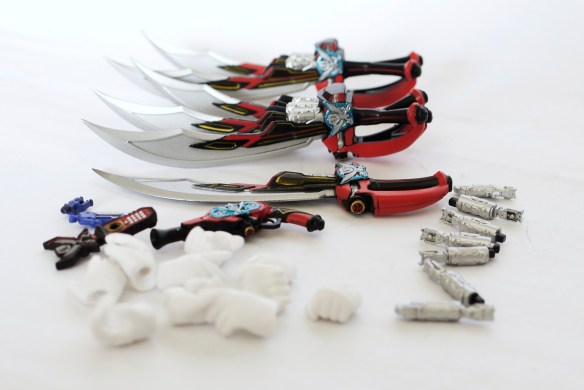 Got to henshin before we go swashbuckling away~ Gokai Change!

The ranger keys are super tiny and Blue doesn’t have appropriate hands to hold them. I used some blu-tack to stick the ranger keys on but seriously, it will be irritating if I didn’t have the blu-tack.

Hakase! I will borrow your sword.

Double-bladed goodness! (Blue only comes with 1 sword, I pinched the other one from Red) 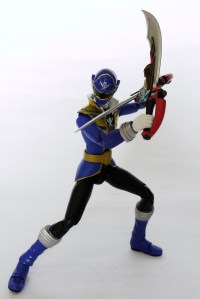 For some reason, the sabers don’t fit that snugly into Blue’s hands and are prone to flop about. Other than that, Blue is really poseable and I had so much fun messing around with him. 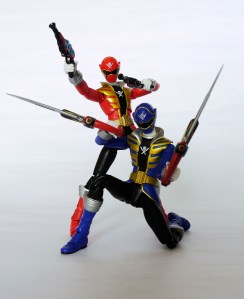 The paint detail for the gun and sabers are also astoundingly good. =D But since Blue comes with more than 1 sword, you just have to let him go wild~ 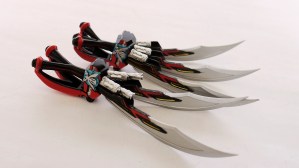 So far in the show, I think Gokai Blue only used this 5 sword display once and I didn’t really think it warranted a release? However since it’s all packed in, it’s craziness in a small dose. The swords are really nicely painted with individual loading docks. You can also switch out the short ones for the longer ones when he does the FINAL WAVE~~ attack. Be careful though since whenever you drop the swords, the docks tend to pop out. 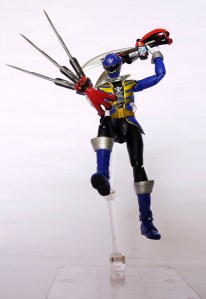 Despite the Joe looking so deadly (or ridiculous) with that many swords, it’s kinda unwieldy and the weight combined with the weak grip, it tends to get loose more often than you care for. Still you can’t argue with the aesthetics of such a look?

Gokai Blue is the 2nd release and pretty much recycles the same body from Gokai Red. I would prefer to have a nicer gold colour but since that would screw up the continuity of the figures, I expect Green to have crap gold as well. Other than that, Blue has a really nice head sculpt and some crazy swords to go along with it. If you were on the fence with Red, Blue will be worth it to take the plunge considering the swords and the possibilities in playability. Compared to Red, Blue is a step-up for the Gokaigers and despite him sporting a duller colour, he has what Red has AND more. For fans of Gokaigers, get him if you haven’t already. For others, get him if he appeals to you. (How could he not?) 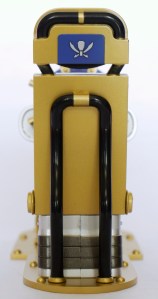 The Gokai Darin included is the 1st release bonus packed with Gokai Blue and one of the reasons why the pre-orders were snapped up so fast.The Darin has a light blue shade to it and despite it being a freebie, it is really detailed and gorgeous in both moulding and paint job.

From the side. You can see all the little details like the black on his pedal and the piping.

The Darin are 2 parts and are not connected. Look at the nice paintwork on the steering wheel!

Blue on his Darin. He looks like he is racing somebody doesn’t he? 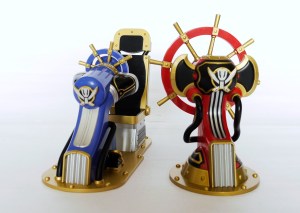 Comparison of Blue and Red’s Darin.

Similar to Red’s Darin, Blue has a gorgeous freebie to go along with him. It’s something fun and an additional piece for Blue to mess around with. However should NOT having the Darin put you off Blue? No, Gokai Blue is a fantastic SHF by himself and the Darin just adds to him. If you want really want the Darin however, act fast before prices get all inflated~ 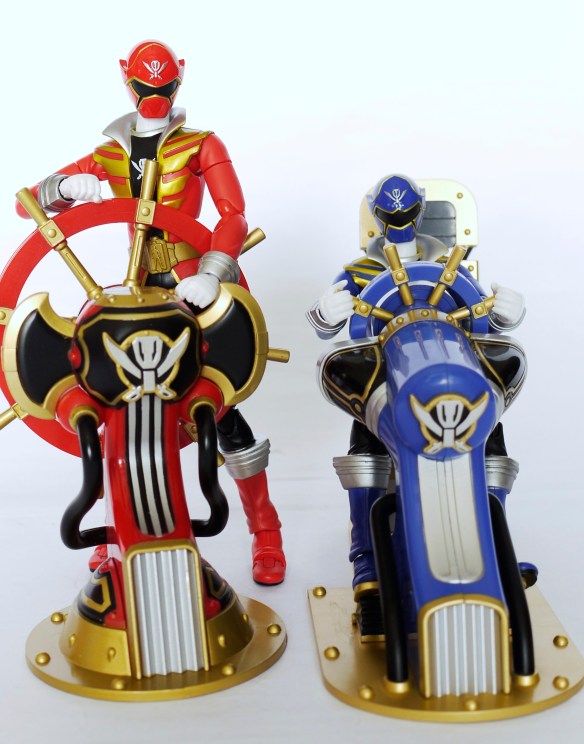