Finally I am finishing up my Nendoroid backlog for review and I’m counting down with the K-On girls! First up is Akiyama Mio, moeblob queen and bassist of Houkago Tea Time!! 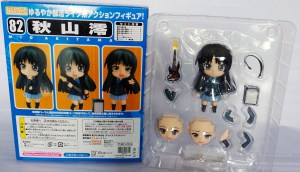 There was a time when K-On Nendoroids cost a bomb but due to reissues by GSC, the prices have now stabilised enough for me to get it without killing my wallet. =)

GSC is either highlighting or bombarding with you how MOE~ the anime is and it’s shown in the base itself. No K-On members can’t have a normal round base, they got to have Nekomimi ones instead! 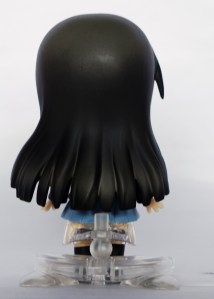 Mio outta the box. Mio is kinda plain, the navy blue uniform combined with the black hair is dull and the only thing that’s nice is her purple eyes (which wasn’t that obvious in the anime?) Mio’s hair sculpt also seems rather chunky and noodle-ish but that goes for most long-haired Nendoroids. 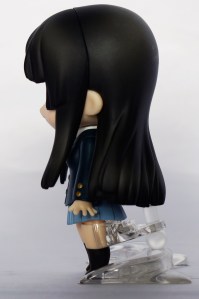 Mio looks even more plain from the side. Doh~

Although her uniform is plain, the gold buttons are painted on nicely and everything looks neat. Mio also has some heft in her chest~ 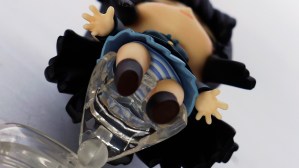 Like the Figma Mio, Nendoroid Mio also has striped pantsu! And pretty well done ones! Nice detail for fans who read the manga~ 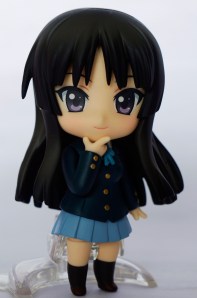 Nendoroids are known for being the epitome of cuteness and everytime you see one, you should ideally want to hug it. However Mio seems to be lacking something and yes she is basically cute since she is chibi but as a Nendoroid…? Something’s lacking. Mio seems to be pondering this conundrum as well. =/

AHA! This is what I’m talking about! Mio looks sooooo helpless now and don’t you just want to hug her~ This is a really Mio-ey face-plate and seriously my favourite one. 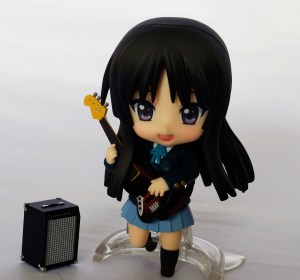 With that, she cheers right up! This is Mio’s 3rd face-plate, the happy one. I don’t really dig happy faces on Nendoroids that much and Mio’s one look rather generic as well.

Aesthetically, Mio isn’t that striking of a Nendoroid and even coupled with her bass (which is brown!), it doesn’t really pop. The accessories are rather sparse and it kind of limits what you can do with her as well. I really wouldn’t recommend this to anyone neutral but if you’re like me and fell into the K-On rabbit-hole, you probably want this very badly or have this already~ Mio is cute, but not cute enough to make non-fans want her~ 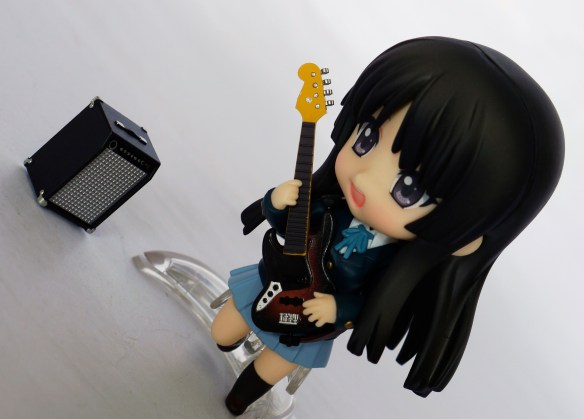