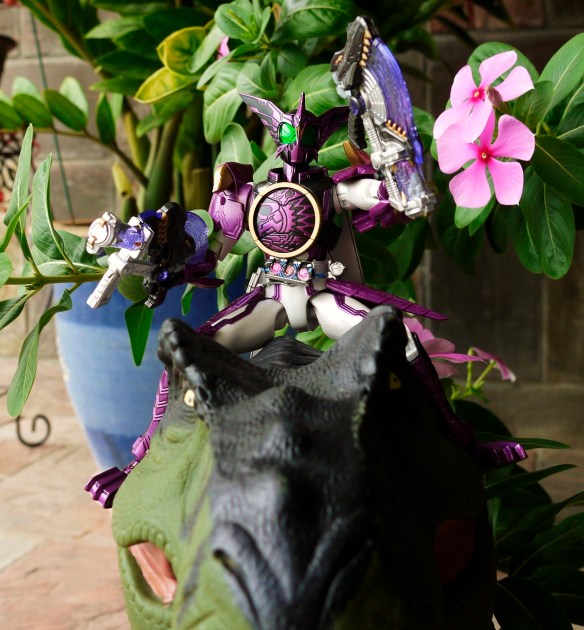 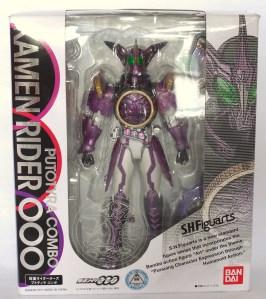 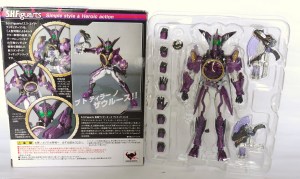 Putotyra utilizes the core medals of Ptera, Torikera, and Tyranno and transforms into a purple Rider. I got mine through an exchange with a fellow friend so let’s take a look at Puto! 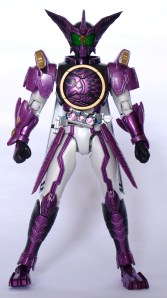 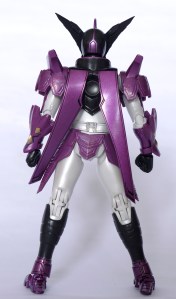 Putotyra is also known as the invincible combo and looking at it, it just doesn’t seem that awesome to me…. =3 (sorry fans, I didn’t watch the series) Anyhoo, Puto has some nice purple paint applications on the helmet and some parts of the armour but the rest is just bare purple plastic, which feels rather cheap. The white has some sort of pearl finish to it which helps the figure to pop visually with the purple contrast. The two wings/flaps at Puto’s back are made of rubber so no posing issues there.

From the side, Puto looks much more menacing with that cool helmet sculpt of his. =) The side skirt can flip upwards so his legs won’t get impeded by them. 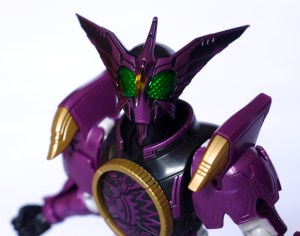 The Ptera head. Check out the Pterodactyl stuck on his head! Pretty neat eh! And there is also a yellow clear part at the Pterodactyl’s mouth. Subtle and smooth~ I heard people broke their Puto’s tip while it face-planted during displaying but luckily, mine didn’t break despite falling on his face. Still be careful about the tip, it’s pretty fragile I suppose. 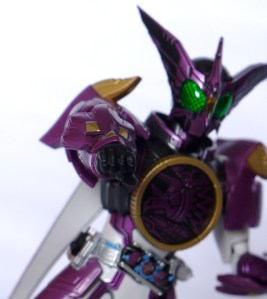 The Torikera arms. He has a Triceratops’ horns stuck on his arm guards and this isn’t as obvious as the Ptera one. Still it’s nice and the guard can rotate about so no issues with arm bent there. 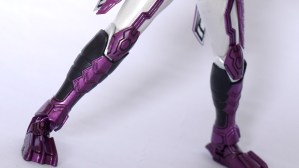 Tyrano feet. Puto has T-Rex feet and it does look dinosaur-ish? I wonder why they didn’t give him a T-Rex head instead? Wouldn’t that be cooler? 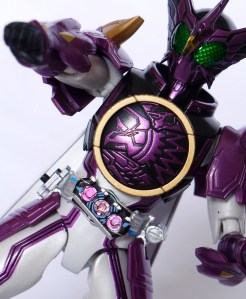 Check out the funky 0 circle (lung?). It’s done with a nice metallic purple paint and it looks really interesting. 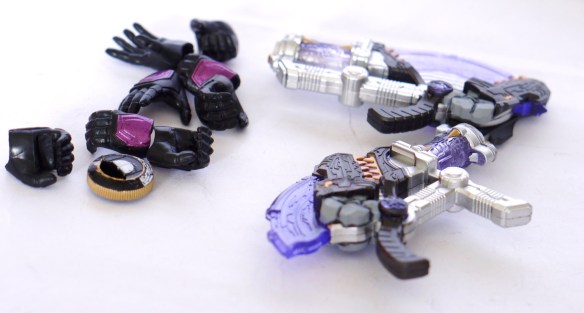 Putotyra so far has been a fantastic SHF and his accessories pick off where the SHF ends. Puto comes with the Medagabryu, in axe or bazooka mode and also the 0 scanner. The details on the Medagabryu is really good and detailed with all the paint applications like the teeth and eyes spot on. The weapon also utilizes clear parts rather freely giving you a really interesting and eye-catching weapon. 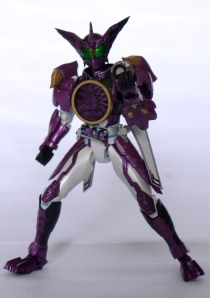 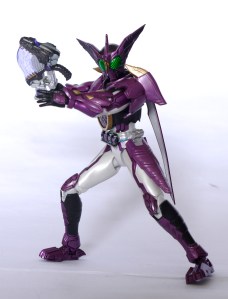 Let’s go for the axe-form first! 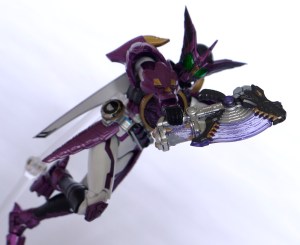 check out that axe! 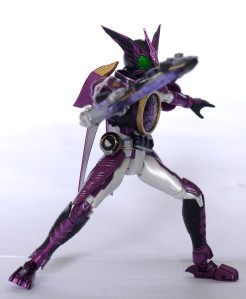 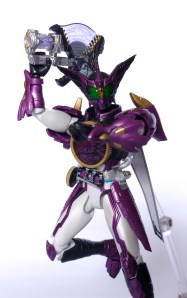 Since the feet is die-cast, I didn’t really bother to bend it all the way to make his feet stay flat on the ground. However I’m sure if you tried it, there shouldn’t be any problems. 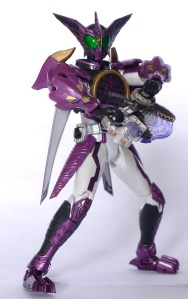 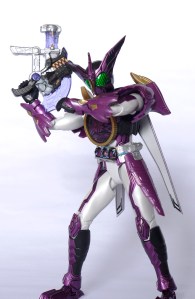 From Axe to Bazooka mode! Only thing that bugged me was that the weapons do look kinda similar, so it’s not that huge leap in creativity. Still the quality of the item pretty much blows this petty concern out of the water. 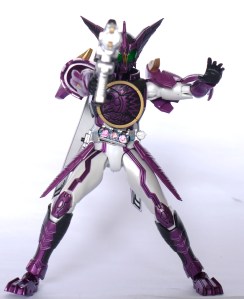 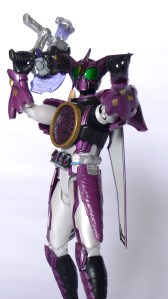 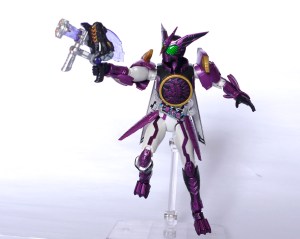 You know what? Why have only 1 weapon when you can wield 2? 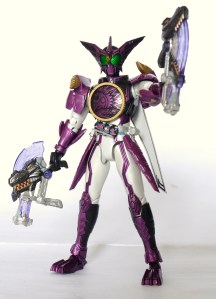 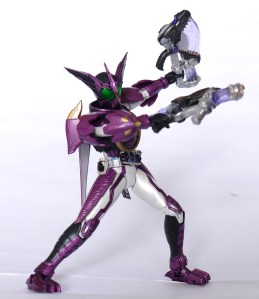 A comparison with 000’s Tajadol combo. 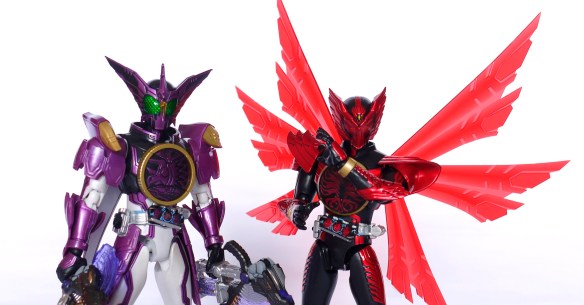 You can see Putotyra is slightly bigger and taller than Tajadol. When you factor in his huge weapons, he is going to look pretty mean~

Putotyra is a really nice release by Bandai. It is solid and can pose well with no issues. The armour all can be shifted or flipped so nothing gets in the way however you want to position him. The 2 rubber flaps at the back are prone to falling off once in a while but that’s something you should be able to deal with. Visually, Putotyra is really different and I can understand if you really hate/like this design. Puto has nice weapons and coupled how striking he looks with them, I would say he is well worth the purchase as a total package. Personally I still like Tajadol more but as a SHF, Putotyra improves on Tajadol in every aspect. 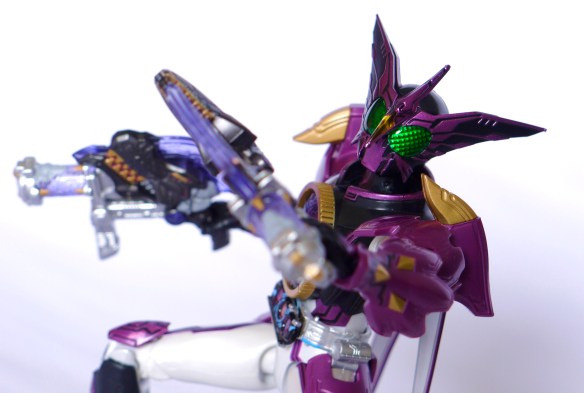 RAAAWWWRR! Thanks for reading folks, more SHF reviews to come!