Nendoroid Homura is the 2nd Mahou Shoujo to be released after Madoka and how will she stack up to the really awesome Madoka? 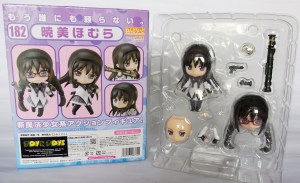 Homu’s box had all sorts of magic circles and with the purple to blue gradient, it’s a very pleasant colour. 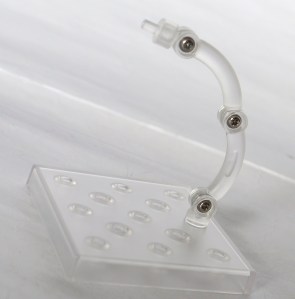 Homura also comes with the arm-stand, which makes it much easier to do action poses. 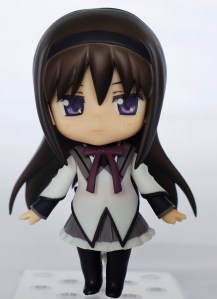 Homu-homu has a really plain costume going on. From her black hair to the white shirt and then the grey skirt, it really isn’t the most attention grabbing outfit. Still she looks pleasant enough and not paint messes on mine. For some reason, there seems to be a faint red gradient around her chest to waist area and it’s only visible with light. I suspect it might be the ribbon reflected on her shirt? 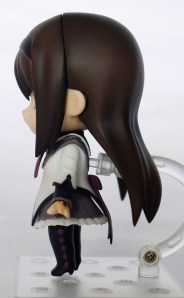 Even though Homura is really plain, her stockings still has the diamonds sculpted in. It’s tiny but still looks good! 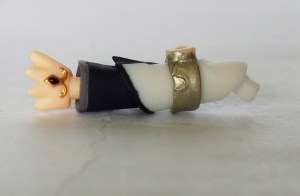 Her left hand also comes with the jewel painted and look how beautifully done it was. I suppose you got to hand-paint such small details and to not spill over the edge, that does require some skill. Well done unknown worker in China!!

I really like how the Madoka girls have the crayon sketch eyes going on with them. It’s really unique and gives a whole different feel to them.

Homura comes with extra arm parts, hands, a gun and bazooka, her shield and 2 face-plates together with another head!

Alright now time for a rant. Homura’s hair really gets in the way for her neck articulation. if you plug her into the base, her hair will severely impede the rotation of her head and you get stuck with a rather stiff looking Homura. I also bemoan the fact that Homura doesn’t come with any bent legs which makes posing look rather stiff. Well with that out of the way, let’s check out how Homura poses.

Good thing about the arm-stand is that you can do aerial poses. Bang bang!~ I also switched out her impassive face for the cross one. Not that there is much difference though. Still I love my angry Nendoroids. =3 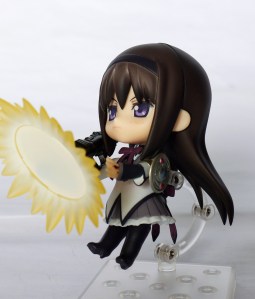 The bazooka is yet another bone of contention. It really is a pain to balance it and make it look decent. This time Homura’s fringe gets in the way so the best I could do was aim the bazooka slanting towards the center. I couldn’t make it go straight due to Homura’s fringe pushing it. =( *The effect part used for the right photo doesn’t come with Homura*

I was having so much frustration posing Homura with things falling off and the bazooka not staying on that made me really disappointed how this Nendoroid turned out. The extra head provided turned things around somehow. By providing an extra head, there are all sorts of configurations you can do for your Homura!! The tips for her braids can rotate but are prone to falling off so be careful. 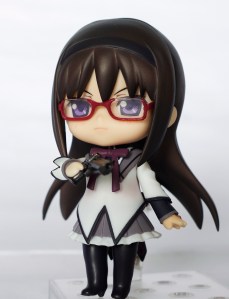 My favourite is angry Homura with the ling hair untied and red glasses!!!! Meganekko!

*Picks up the Bazooka, BIG BANG* 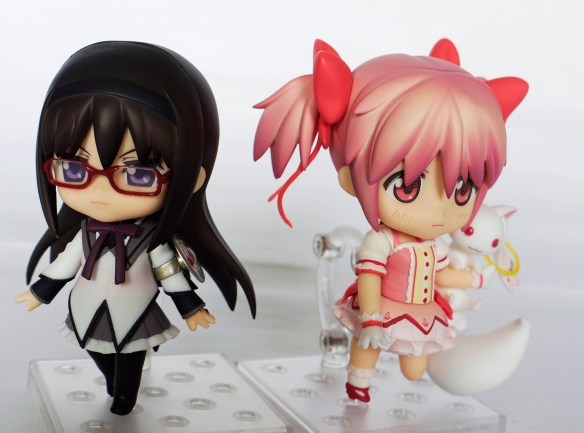 Side by side comparison.

I really like Homura as a character in the anime and am I disappointed how things turned out? Disappointingly enough, YES. I wouldn’t fault the Nendoroid’s costume design, granted that it came from the show. However I felt that Homura’s hair could have been sculpted better to provide more head freedom, bent legs could be given to have more action poses and also a better holding system for the Bazooka. For a girl that explodes stuff frequently in the anime, when she is Nendoroidfied, it’s really difficult to anything interesting with her. On the plus side, Homura really looks mean when she stares at you with her stern face-plate and you get the feeling she means serious business. =3               I wouldn’t recommend Homura as a purchase as she falls behind Madoka so much when compared. However if you’re like me and heavily affected by the awesomeness that is Homu-Homu, nothing I say will sway you~  Do I regret this pre-order? No, but I really wished it was done better. =( 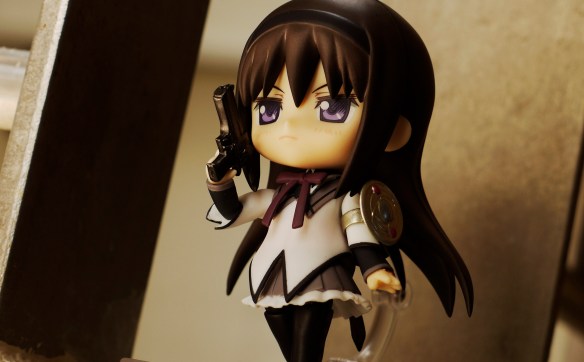