With Working!’s 2nd season airing, Alter announced the first Working! figurine and I was expecting Popura to get it, but lo and behold, my favourite character, Aoi-Chan was announced instead!

Working! is mainly about a restaurant and it’s operations. Boring? Hardly, it’s really ridiculous but all sorts of strange things happen in Wagnaria, the restaurant and the loafer Yamada Aoi is my favourite!

The fancy round white base. =3 Yamada’s one has her name and a cutlery emblazoned on it. Plain but colorful.

I really like figurines who have some sense of motion and Yamada’s pose, even though simple has the whole movement thing to it. That’s pretty nice. Also since she plugs in at only 1 point, leaning might be an issue in the future but since she feels pretty stable, I think that’s not really an issue.

This figure only works if you’re facing her straight since her head is only facing 1 direction. Limitation of displaying it then. =3

As with any figurine, the true worth is it’s face and Yamada’s one is alright. I wanted her to have slightly more droppy eyes instead of such a fresh, energetic expression though. Not too bad by any stretch any way.

The crinkles on her uniform are pretty realistic but still retains some sort of anime flair to it. Eh…what I’m trying to say is it looks real enough..but in an anime way. Makes sense? =3 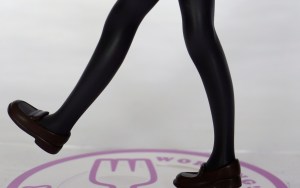 simple simple legs but I love black stockings on a girl so yay! =3 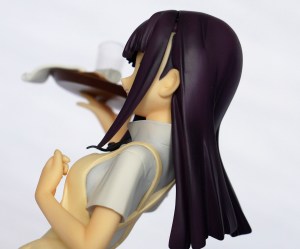 Since you can change her hair, you can remove the hair pieces. For some reason the gap can’t close Yamada’s left side and there is the ugly flesh gash. Boo! 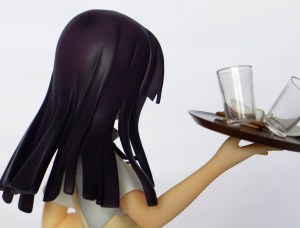 The anime doesn’t have complicated flowing hair and the figurine stays true to the representation. Kinda looks like thick noodle strands though. =3

Her precariously falling cups and towel!

Yamada comes with the menus, water effect parts and an alternate hair style. 1 menu is double page printed while the other isn’t. Strange eh? 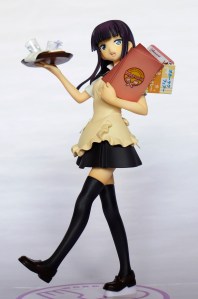 Once you add in all the extras, Yamada really looks that much livelier and definitely more trouble-making! 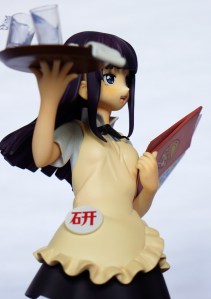 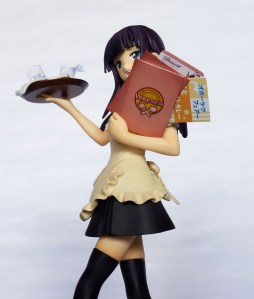 a look from various angles.

The water effect part is realistic and really quite fun. One of my favourite parts of the figurine. =3

a change of hair-style! 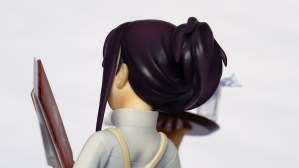 I personally like this hair-style more but hey since I can always switch it around depending on my mood, that’s pretty awesome!

Alter is known for their quality in their figurines and despite Yamada being a simple character, there are little nuances that brings out her character. I really like how klutzy she was depicted in this figurine and her mid-stride offering her some dynamism. She isn’t that costly as well compared to other Alter’s releases so if you are a fan of Yamada, grab her before she is gone! Or alternatively, you can wait for Popura’s release since she was also announced by Alter. =O