Following on from Rising Dragon and Pegasus, I bring you the last rising form of Kuuga, Rising Titan!

Being a Rising form, this follows the trend of being an exclusive. Hmm.. 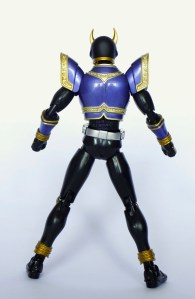 Titan form is the ‘tanker’ of Kuuga. It has improved defences hence the bulky shoulder armour and rising has an extra sword and the golden trim. I really like the metallic violet of Titan form and despite having so many Kuugas, the different colours are still pleasing. 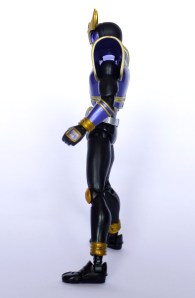 The shoulder armour is really large and almost blocks out Kuuga’s head from certain angles.

A better look at Kuuga’s armour. As I mentioned before, the colour is really appealing and combined with Kuuga’s violet eyes, it’s lovely. =3

Rising Titan comes with 2 Rising Titan swords instead of 1 compared to the Titan version and that was a primary driving factor for me to get this SHF. Look at those blades, man they look cool!

Look at how much meaner Kuuga looks with those swords. Sadly though, the problem from Pegasus/Dragon continued on to Titan. He can’t hold his swords tightly! If the swords were at an awkward angle, they would slip off and that makes posing a pain. Man from a good thing, Bandai screwed it up with the loose hands. =( 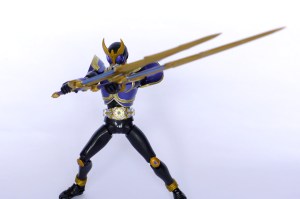 I have all the forms of Kuuga (except Growing which is ugly) and colour wise, Titan has got to be my 2nd favourite after Mighty. His 2 swords are really cool and compared to Dragon or Pegasus, more intimidating and visually stunning. What ruined it for me were the hands not being able to grip the swords tighter and therefore, making me pose him lesser. If you have to go for another Kuuga after Mighty and Ultimate, I would recommend Ttitan but seriously, just stop at Ultimate. The rest is for when you have cash to spare and nothing to spend on. =3