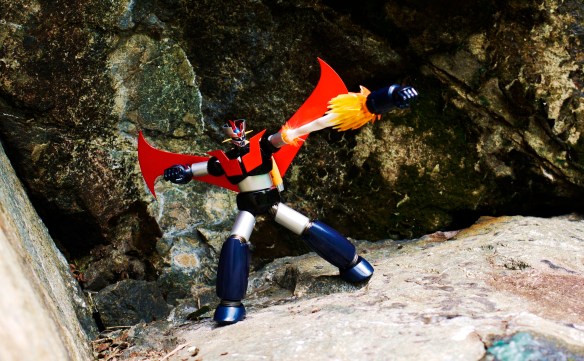 The Super-Robot Chogokin line is a smaller, scaled down version of Bandai’s own S.O.C (Soul of Chogokin) line. Other than the smaller size and price, the articulation is supposed to be really good! Coming off comparisons between Ultra Acts and S.H.Figuarts, how will Mazinger hold up?

The sash around the box says that the 1st release bonus is included for this product. Which is a crappy piece of Styrofoam which acts as a base for Mazinger…since I went outdoors with Mazinger, there really wasn’t a point so I won’t be using it.

The first impression I had lifting Mazinger out of the box is that it feels really solid. Forget SHFs with die-cast ankles, Mazinger here has die-cast legs and body..bringing a nice heft to it. The front looks really clean and shiny but once you look to the back, all the screws and connectors become really obvious..

Mazinger Z is really really iconic and as I handled him and looked around, I being to really appreciate the simplicity of his design. The paintwork is solid and looks really smooth with a metallic finish. Aesthetically, it looks really classy and more of a collectable than a cheap toy. =3

His chest armour is also similarly painted with a metallic red and it sure looks nice. But Mazinger looks kind of weird..why’s that..? Because…

The Hover Pilder is not yet docked! For something so small, there are some nice paint application on the rotors and the front. Nice! MAJIN GOO!

With Mazinger Z’s aesthetics really impressing me, what else does he pack to make me go wow? Depressingly enough, not that much. Just 2 other pair of hands, his Majin Blade and the giant Rocket Punch hand. Ah well.. =( 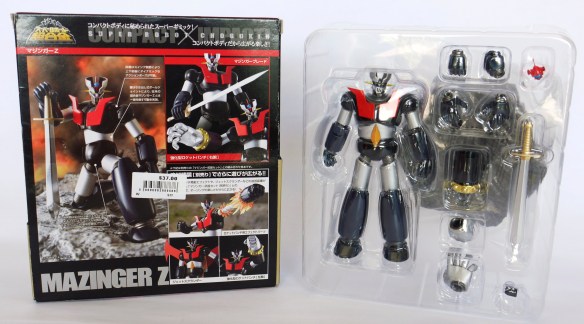 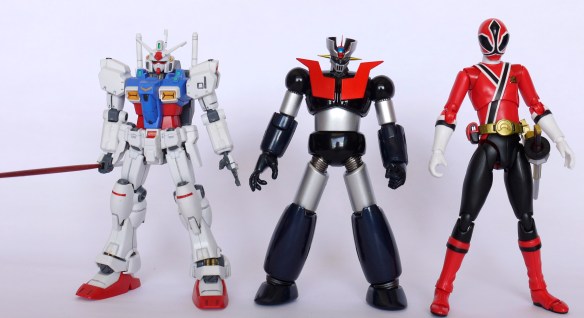 Well enough with the whining and let’s move on. How does Mazinger fare in size with other Bandai products? On the left, you have a 1/144 GP 01 and on the right, a SHF SHinken Red. As you can probably tell, Mazinger is around 1/144 size so if you have NOTHING but SHFs in your collection, he is going to look smaller in comparison.

Looks are good, accessories are ok..how does articulation fare? It’s actually pretty good here. The arms and legs can bend up to 90 degrees (and more), his arms have no shoulder armour so full clearance (almost, with the chest armour blocking sometimes) is possible. Only issue I had were the legs not being able to raise that high. Not that much of an issue since it is a Super Robot after all, not some Olympic gymnast. =D 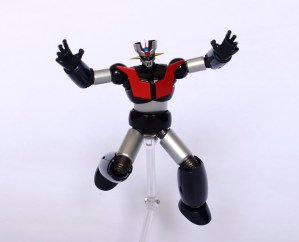 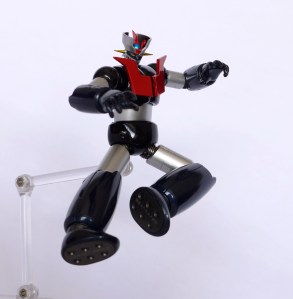 MAJIN KICK! The connecting peg provided fits into a Tamashii stand and despite Mazinger’s weight, it can hold him up. Still since Mazinger is so heavy, it does takes some adjusting and balancing to make it stand.

The Majin Blade is plasticky and therefore real shiny. It looks rather cheap and to compound the issue, Mazinger can’t grasp it tightly at all. The grip provided via the hands are way too loose so the sword is going to flop around..=( 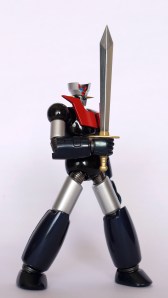 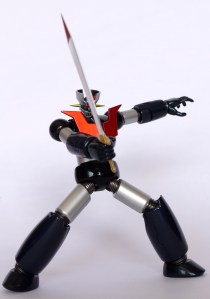 With such a loose grip, you can’t really get any flashier poses as the sword will fall out. =3 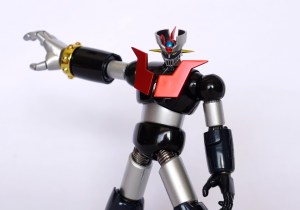 And now for the Giant head. You just pop off Mazinger’s normal hands and slot this on. In case you are wondering..no you can’t put the big silver hand on his normal wrist, the pegs and holes don’t fit..DOH! 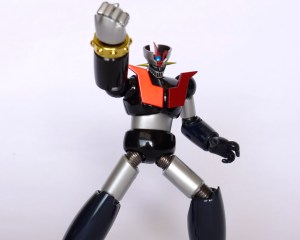 The giant arm seems rather tacky and despite presenting some interesting photo opportunities, just doesn’t seem that worth it.

Being Mazinger, I felt obligated to re-create my own Rocket Punch so here goes! ROCKET PUNCH!

Ohh..what’s that? The effect part set? The review will be coming up soon! =3

Mazinger as the figure itself is truly excellent. The paint applications are gorgeous, it has a really solid heft and overall just feels of quality and class. The accessories in contrast are kind of crappy and feels cheap so I guess Bandai did a balancing act there. =3 I totally recommend Mazinger Z and it’s a cheap way to obtain A Mazinger Chogokin without busting the bank but seriously without the rocket punches, it just feels half-complete.  =(

Stay tuned for the effect parts!