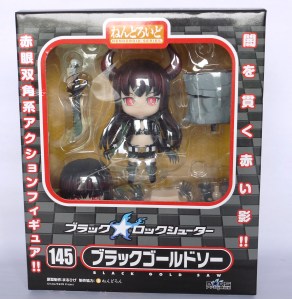 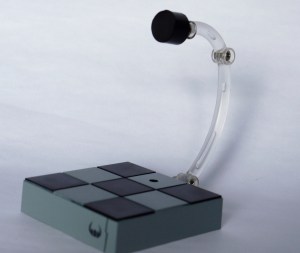 For some reason, BGS comes with a magnetic stand and that’s really cool, since it’s more secure and just plain fun. =3 The magnet is really strong though, so in the long run there might be a mark on your BGS due to the stand pressing down on her head. Put a piece of plastic or paper in between the magnets to sort of buffer it. =3

I already handled the Figma so not much surprises here. However the Nendoroid’s hands look really large in proportion to the rest of the figure no..? I know BGS has big hands but shouldn’t they scale it down a teeny bit more for a Nendoroid? 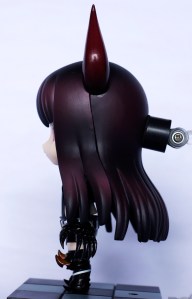 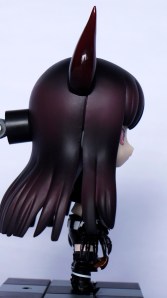 Her horns are solid plastic unlike the translucent ones of her Figma rendition. 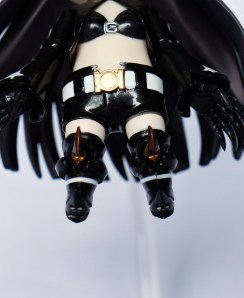 A closer look at those deadly boots~

And the knees can bend!!! It’s really cool and only my HMO Miku has moveable knees. =D

The stripes and stars on BGS are crisply painted on and she has the shiny black similar to BRS. However this shiny coating does attract dust and feels sticky after awhile so display yours in a cool ventilated place and dust her often! =D

Compared with the Figma, the Nendoroid has the same things but with the added chanXco stuff.

BGS: I want your soul~ 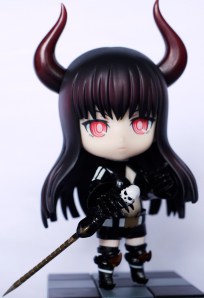 Ahh the King Saw. The skull on the handle looks really mean and so does the jagged edges of the sword. Those are the positives…but it cannot really outweigh the fact that King Saw looks and feel like a walking stick for BGS. It’s just tiny and even DM had a larger scythe. If I had a main issue with BGS, it would be the Tiny Saw. 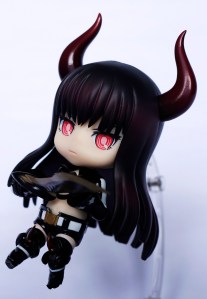 Not that it’s impossible to look cool with Tiny Saw though..it just takes a little more effort. The angry expression works more for BGS here than the blank one. However what happened to my evil BGS? The Nendoroid only gets a stoned or pissed BGS, no sublime villainy here.. =(

My creativity was failing me at this point so I just went straight to the chanXco expression. It’s really neat that there was some chunk of rock provided for BGS to sit on easily my favourite bit of BGS. =3

Regrettably enough, I’m coming to the same conclusion for BGS as I did for Nendorid DM . The Nendoroid is fine, but underwhelming. The Figma had such excellent details, vibe and playability and the Nendoroid just doesn’t feel the same. Her King Saw is tiny and cute (a Nendoroid duh~) and she lacks the evil which attracted me so much to the Figma..the chanXco is a plus though and if I would every display BGS, it would be for that. It is not a bad release by any means, just not that captivating..get it if you can’t get the Figma..or just skip it? =3

Muahahaha、now bow before the queens.