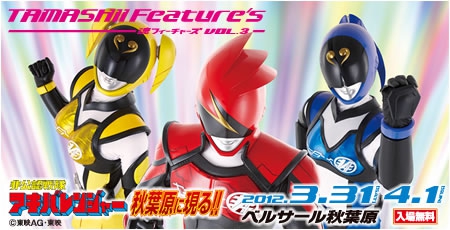 After WonFes, Bandai has their own events showcasing upcoming stuff from their collector’s division and as a fanboy, that is something to be really excited about! Goodies were galore and although my wallet is crying, my heart is leaping in joy~ =3 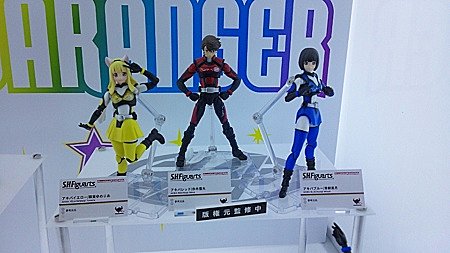 Maybe it’s me but after the Gokaigers, I just feel that both Gobusters and Akibarangers have really strange helmet designs. Thanks to that I am able to skip those releases so cheers! 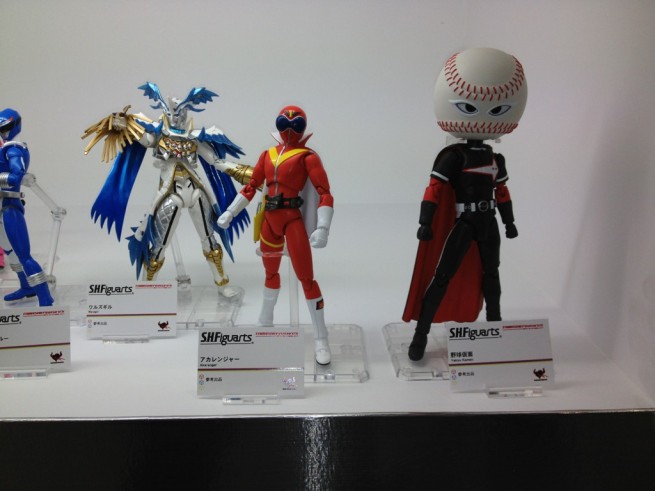 Despite me being non-existent when Go-Rangers were airing, I know a legend when I see one. Akaranger is definitely on my to-buy list! Not really such a big fan of how the joints show but it’s Akaranger! 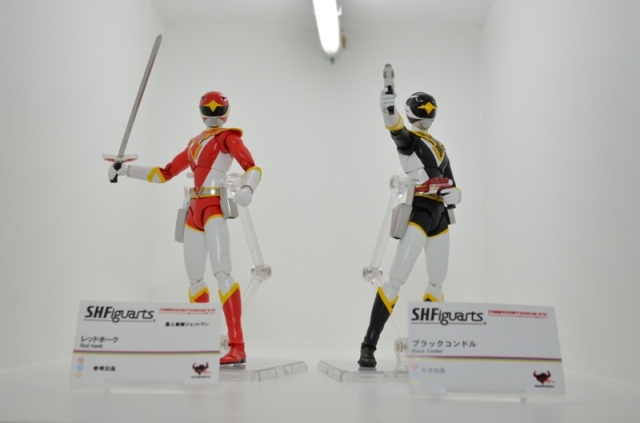 Next would be Jetman! I really like their design and if all were to be mass releases (yeah right), I would be aiming to complete their team. =D

Bandai knew that Red Hawk was awesome and erected a crazy cool diorama to underline just why you needed to get him. =3

Boukenger has their own cool diorama as well but I’m happily skipping over them. =D

Ultraman is getting ANOTHER version for the Ultra Act..the Renewal version..This time it’s using the Dyna body-sculpt so everything should be way improved since the 1st release. Not that big of a fan that Bandai re-did him since I don’t want to get doubles…but hey I know I’m getting him anyways…renewal or not. =(

And then Shocker Rider! Being a Toei Hero Net exclusive is a bummer but hey I can live without it! I already have Ichigo and Nigo and having Sango might be too much? =3

My favourite suit finally gets an appearance in Robot Damashii form. =D I was so pleased until I stared at the picture and realised how crappy Sazabi looks. The red is just kinda rubbery and are there even 2 tones of red for it? I can’t tell. Worse are those thrusters by his crotch and front skirt..they really should be painted yellow instead of being left like that..I might as well get the HGUC if the Damashii looks so bad.. (I do have the HGUC already though.. =D) The yellow is pretty sickly as well..Sinanju had the crappy red but at least his gold trims were pretty..this is just sad. As this might still be a prototype I will reserve further judgement till the promo pics come out.  Proportions wise however it’s pretty nice so yeah..we’ll see.

Woah Nu Gundam comes with a heck load of cool effect parts and if I had the space, it would be really tempting..however Char still wins over Amuro in my heart so sorry dude, Sazabi might be more important~

Shirahoshi Hime! It’s nice to see Bandai following the size discrepancies of One Piece characters (sort of) but Shirahoshi should really be bigger..however I think this is a reasonable size but still the Megahouse rendition looks prettier?

When Monster Arts were launched, I was slightly apprehensive about the whole thing. For that price, Godzilla seems rather small and boring but now King Ghidorah is here…I promised myself if the King of Dragons were ever to be released I would be getting him..so thanks Bandai?

Last but not least we have a sneak peek at upcoming SHFs of Riders. Other than the Ryuki series (a serious drain on resources), we have Stronger (YES!) and Den-0 Sword form. =3

Those are only like maybe 1/5 of the total products reviewed so if you’re curious to know what else is coming up, take a look here, which was where I linked the pictures from. To preserve my finances and sanity, I’m only getting Jetman, Akared, Stronger, V3, Ghidorah and Ultraman. Sazabi is a maybe but if it looks so crappy, I can give it a miss. =3

Thanks for reading and good night (in my area at least) folks!