It might seem only a slight while ago that I reviewed Mami and then suddenly Sayaka is also arrived! Well having so many Mahou Shoujos can only be fun so let’s start with Sayaka’s review! =D 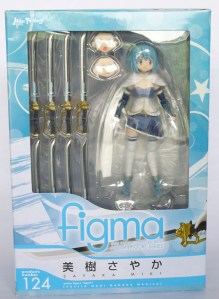 Similar to Mami, Sayaka probably believes that more is better. Thus she is packed with 8 swords and an extra cape. =3

Sayaka looks pretty sweet with the blue/white colour scheme and there are varying shades of that colour throughout her costume. Her skirt is a solid rubber piece and absolutely screws up her pose-ability. You cannot raise her legs up at all and it’s just disappointing..What is fun though is that Sayaka-chan has a cloth cape! Other than Figma Siren and Index..I can’t really recall any other having cloth in their costume. =) 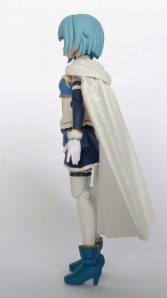 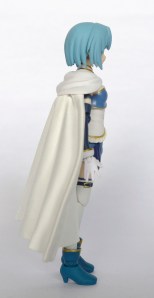 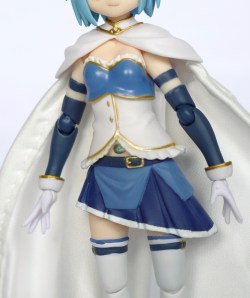 Being bummed out by Mami’s sad paintjob, I lowered my expectations for any future Figma releases and Sayaka didn’t disappoint! Her gold trims didn’t spillover while her stockings despite having slight bleeding isn’t all too bad. The blue paints overall gave her a fresh and peaceful vibe..like! 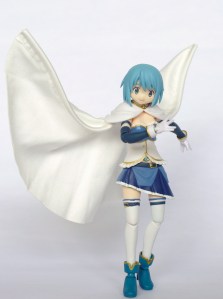 There is a bendy metal wire running on the sides of her cloak and you can create all sorts of cool effects with it. =3

8 swords, a Figma stand, another cloak (plastic), hand rack, 8 swords and 2 other face-plates with the paper base. I have a major complaint with the clear sword holders here. Unlike Mami’s rifle holders which plug in snugly, Sayaka’s swords just rests in the holders. With slight movement, they will fall out and if possible, be even more irritating than Mami’s rifles. =O

Me: Why is posing your swords such a pain..?

Sayaka: Ehh..haaha I don’t know? But what I do know is that I look awesome doing this! 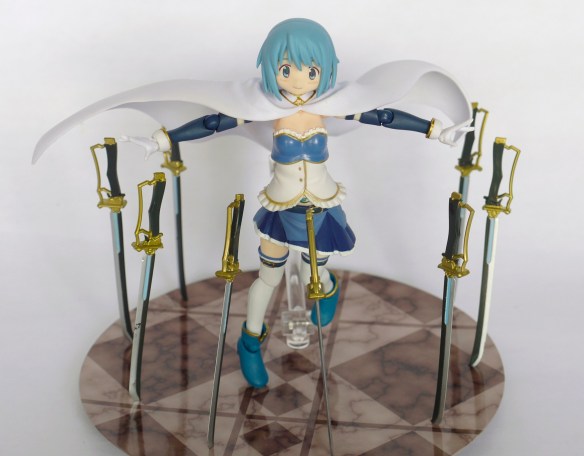 Me: Oh hell yeah, that does look crazy awesome! 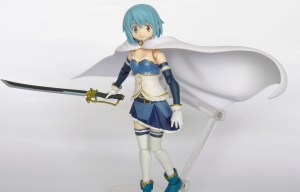 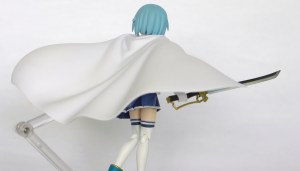 There is also another cloak included and unlike the cloth one, this one is full plastic. I personally prefer this one more and the flow looks more realistic. However being a full piece, it’s heavy and without a stand pegged in, Sayaka can’t stand on her own. The plastic cloak is also rides higher up her shoulders so you have more clearance for her arms to pose. However that comes at the price of neck articulation..=3 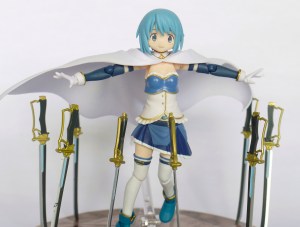 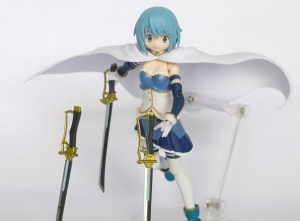 The little round cuffs on her wrists are also prone to falling off whenever you switch hands so be careful. I’m also not such a big fan of her smiling face so I swapped it out for some angry moments~ 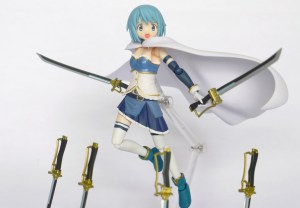 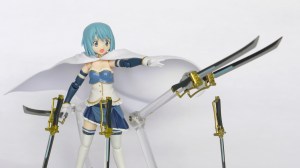 Clash of the Blues 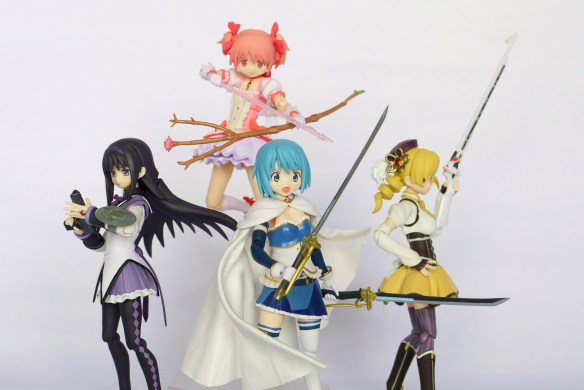 I really disliked Sayaka Miki in the anime..she started by making a dumb wish, then suffering so much because of that. In between her despair and self-owning, I was really hoping someone would stab her. Needless to say I wasn’t really anticipating her releases and got her only because of her multitude of blades and the compulsion to complete the magica quartet. However the Figma was way more fun than I expected and despite the horrid issue of Sayaka not being able to raise her legs forward, the poses she can strike are really cool and with 2 different cloaks provided, plenty of awesome action scenes can be re-created. I don’t regret getting her at all and if anything, the Figma makes me want the Nendoroid even more. =D

I am such a loser…XD