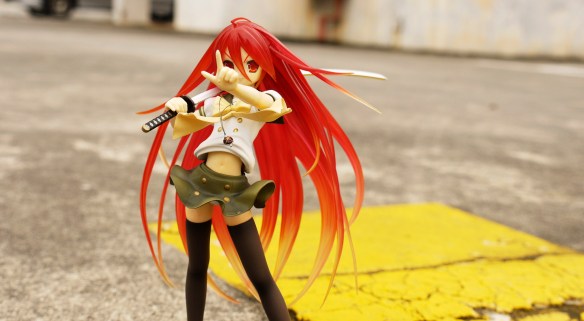 With the 3rd season of Shana having just concluded, the interest for Shana goods have been up once again. Therefore when I saw someone letting go of this piece for $40SGD/2600Yen I grabbed her faster than you can say Nietono no Shana. =3 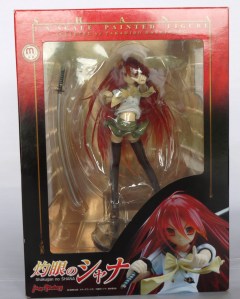 Shana is a 2007 release and mine is 2nd hand to boot. Knowing that I didn’t go into this review with the highest of expectations. =3

If you don’t know who Shana is…really? All you need to know is that she wields a really long katana and has blazing hair and burning eyes. So essentially Shana has fire for hair! If that isn’t awesome enough for you..I won’t know what will be. =3

Bleh, a plain black base. Not the most imaginative base but at least it is small. 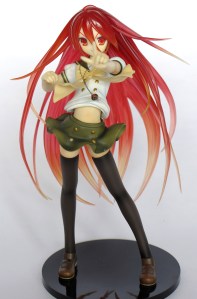 According to the box pictures, Shana has really translucent liquid looking hair. Ah well I can see that isn’t the full truth..BUT that might be achieved by some really clever lighting so I’m willing to give MF the benefit of the doubt. I would also like to state that Shana’s hair is really STICKY! Especially at the tips. I’m not sure if it’s the coating or the clear paint used but due to age deterioration, we now have a gluey-haired Flame Haze. =3

I like how MF went with Shana here. A really confident pose complete with a pointing finger while her uniform flares about. Simple but commanding. However Shana seems to have a yellowish skin tone and I’m not sure if it’s due to age or what but it does look slighly sickly. 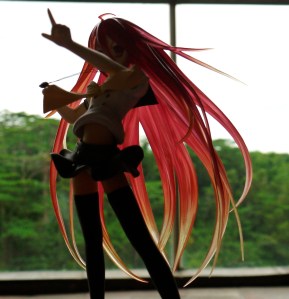 I then took Shana to the balcony to test whether or not the hair is truly translucent. Well it is and with some good lighting going on it should look kick-ass. =3 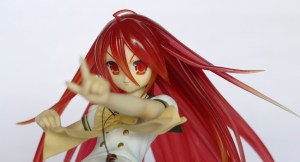 Shana has a nice smirk there. Like she knows she is going to kick your ass and enjoy doing it. It’s also cool noticing her ahoge intact and although personally I would prefer it to be larger, this works as well. =) 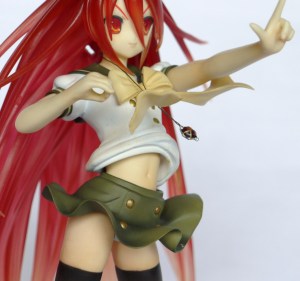 The uniform is also flaring up in the most unbelievable of ways, like a tornado was right below Shana’s feet. XD Therein lies an issue..if the front of her uniform was being blasted around so much, why is the back of her hair so limp..? 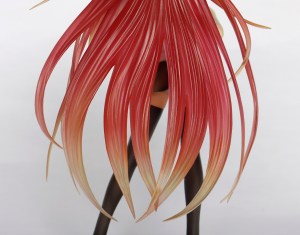 Shouldn’t it flare up as well? Maybe the it’s a fan-service wind, so you can get a glimpse of her pantsu without those irritating strands of hair blocking the holy view. =3 Speaking of her hair I like how it’s sculpted giving it an impression of having separate strands and a sense of movement.

Authentically enough, the pendant comes on a metal wire and that makes it look really realistic. The paintwork on Alastor pendant is really neat as well. However I had little specks of black dust from the metal wire when I got mine but nothing that can’t be swept away. The ribbons look really funky flying about like that but since it’s hard plastic, be careful not to break it. 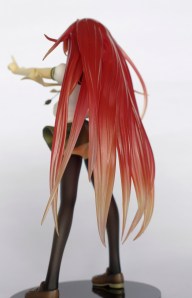 Shana is back heavy due to her hair and without the base, she can’t stand. =(

Even with plain black stockings, Shana still has some nice shading at her knees. =D 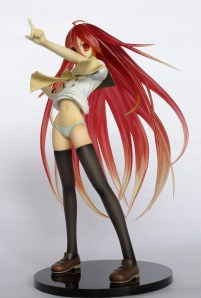 Shana also has a cast-offable skirt so cheers to that? =3 Just remove her upper body and slide off her skirt and tada! A pantsu Shana!

The only accessory that Shana comes with is her katana. It’s not really an accessory I suppose since the figurine without it kinda looks dumb. Nothing too spectacular about the Nietono no Shana..looks nice enough but since most of it will be covered by Shana, it’s not really a focal point. 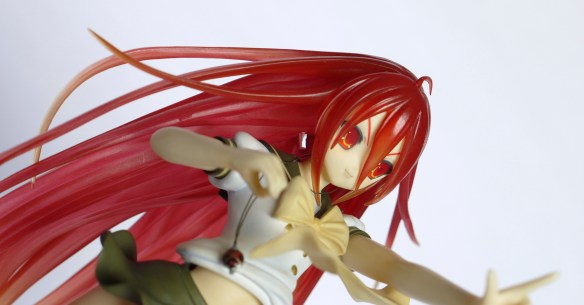 Spy the little gap in between her hair? That’s where the katana goes in. 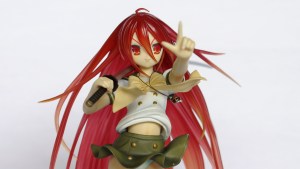 I read people having issues pushing in the katana but it was a piece of cake for me. Just slide the sword all the way into her hair and then slowly maneuver the hilt to her hand. Done! Don’t be too rough though..the sword might snap. =O

With that, Shana looks complete! 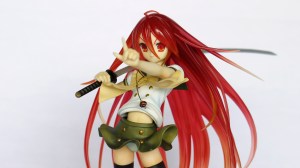 I got to give Shana some cool points here. A katana through your hair? That’s just oozes awesomeness. 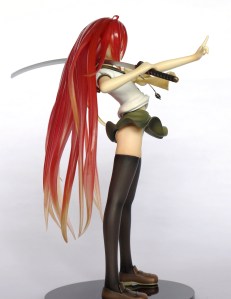 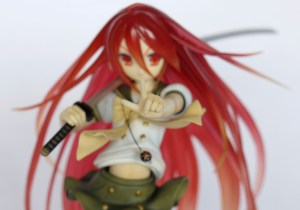 And where’s my Melon Pan? 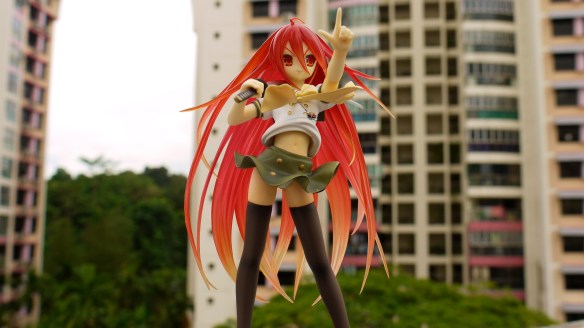 Before I got Shana, she was on the figurines that I always saw but could never get. So when I saw her being offered at the ridiculously price of 2600Yen+, it was such a crazy bargain. Now that I have gotten her, I don’t regret it one bit. Just the clear red hair makes er so different and despite the simple design of the figure, it all comes together. Even though mine has sticky hair and some age deterioration issues, I’m really pleased with this figurine and considering it’s age and rarity, it can still hold its own amongst the newer releases. =D And Shana also takes a surprisingly little amount of display space! =D

thanks for reading! It was a pretty lengthy review this time round. =3