I reviewed a previous Super-moveable Nendoroid in HMO Miku and therefore expected loose parts and all of the bits of being super-moveable to be present in this Nendoroid. So without further ado, I present to you the King of Knights, Saber herself! =3

It’s rather obvious that Saber is super-moveable, right from the words being emblazoned across the clear plastic window. =3 It’s also a neat touch that her names has a golden font to them. =3 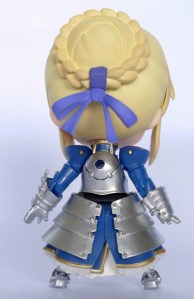 First and most importantly of all, Saber can STAND on her own 2 feet! No stand, no hair piece acting as a crutch, just pure balancing on her legs. I’m really impressed by this..no Nendoroid I know are able to stand like this. =3

Saber looks fantastic..seriously! Her silver armour has a really nice shine to it, her sculpt feels so streamlined and overall, she just looks so adorable. XD Her side fringes are made of rubber so pose-ability isn’t compromised but it honestly looks so compatible with the rest of the hair you wouldn’t even know it’s of a different material.

The panel lines are neatly drawn in, the paint application is so crisp..aesthetically, Saber aced it all. =D

Why is Saber super-moveable? Well check out those joints! This makes it really fun to pose Saber with and since her skirt is connected via ball joints, you don’t really have anything blocking your way.

Since Saber is so poseable, the normal assortments of hands and legs that comes with a Nendoroid are superfluous and we only got some hands, 2 Excaliburs, Caliburn and 2 face-plates.

Both swords and their scabbards are really detailed and beautiful, especially Caliburn! If you were wondering why is Excalibur’s (top) handle rather shot, well it’s because my cousin broke it by accident and when I glued it back, it became like this. =3

The King of Knights with her swords! 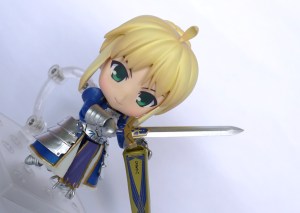 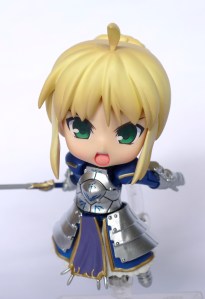 Saber comes with a scabbard holding hand similar to Saber Lily so I wasn’t too fascinated with it this time. 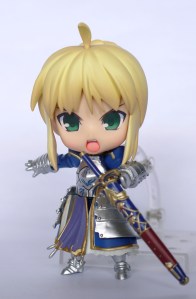 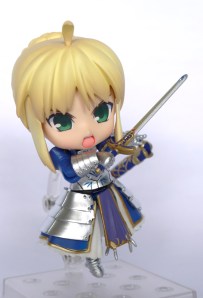 Ah Saber’s angry face! I really like how her teeth was sculpted for this face-plate and this is the best out of the 3 provided in my opinion. =3 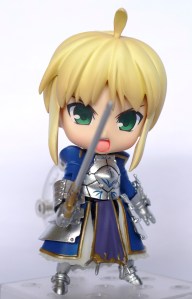 Saber seriously looks good however you pose her. And despite the nuisance of her arms popping off frequently, the cool factor is more than enough to overwrite that irritation.

Of course with 2 swords you can make her wield both at the same time. =3 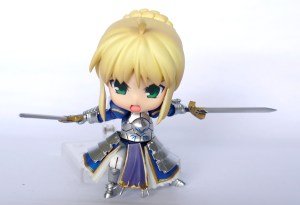 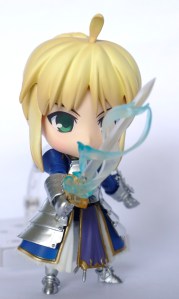 Seeing as how Excalibur was also shrouded in invisibility in the series, GSC re-created that for the Nendoroid and that just looks cooler than plain old Excalibur. =3 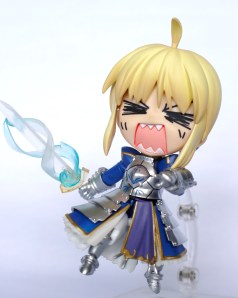 The invisible Excalibur also has the feel of a finisher and when combined with the screaming face-plate provided, it has a totally whacky feel to it. =3

The Saber Figma was just tremendous so how does the Nendoroid fare? I got to say, this rendition of Saber just blew me away. Having played with a super-moveable Nendoroid before, I expected lots of loose parts and frustration setting up the poses but Saber negated all of that. Since her design is simpler and sleeker (not as cluttered as HMO Miku), there were fewer challenges in doing the poses and when you add in the swords, it’s just absolutely killer. Sure she is still loose, especially with her arms popping off but it’s nothing a bit of patience can’t handle. Saber’s paintjob is solid and despite her lack of accessories, what you have is more than enough and really what more do you need? I highly recommend this release to anybody and anyone..she is really too cool to pass up on. =D 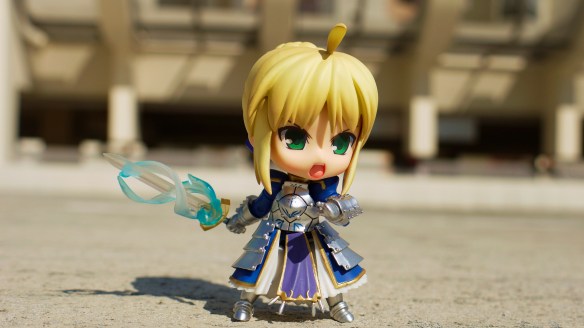