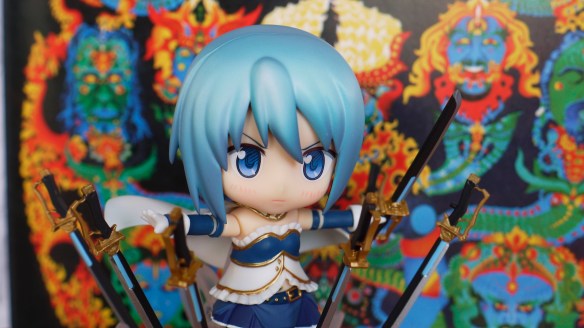 With the Figma Miki Sayaka review up quite some time ago, I finally received my Nendoroid Sayaka so let’s take a look at the emo swordmistress herself! =3 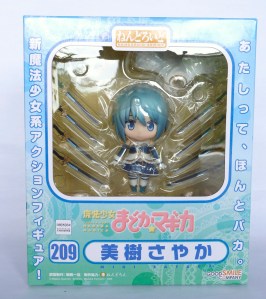 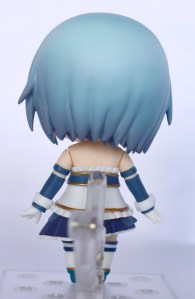 One of the main reasons why I wanted to get Sayaka was because of how pretty those golden trims looked in the promo pictures. Well as you can see here, I got what I wanted and it all looks so perfect, barring some minor minor bleeds here and there.

Sayaka has a really neat and clean look to her, which is starting to grow on me. =3 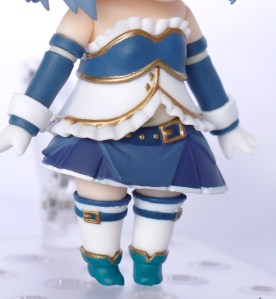 Those lines are really beautifully painted and you can also see Sayaka’s soul gem peeking out from her bellybutton. Those golden trim would make or break this release for me and I’m happy to say that it’s an absolute make. =3

The Nendoroid skirt has also more clearance for her legs compared to the Figma so you can do some walking/running poses.

There isn’t much variety in Sayaka’s accessories but she does make up for it in numbers. =3 With only 2 other arm parts and face-plates, I wonder if poses will be limited..

To put on the cape, just pop the head off and slide the cape on. That means that you can also use the cape for other Nendoroids! Cool! The cape also has some shading done for definition so it’s not a solid white piece.

With the swords all displayed, Sayaka looks real mean. =3 Those swords come with a holder which pegs on the base. That means you can’t have them standing without the base.. boo =(

I used the Figma’s swords for an even more spectacular show of strength! Don’t antagonise Sayaka unless you want to die a horrible, pointy, bloody death. =3

The left photo is my favourite Sayaka pose. She looks so cool walking towards you like this. =3 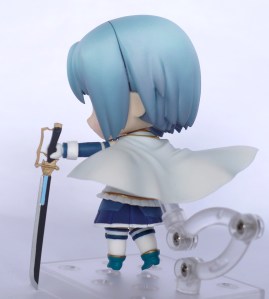 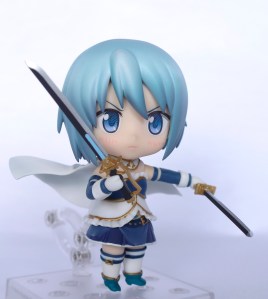 Of course if you have 2 hands, you can wield 2 swords! 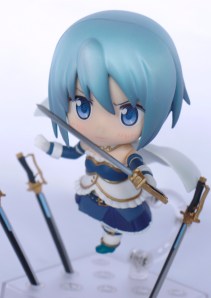 And Sayaka also comes with a unique wincing expression! Considering how often she got battered in the show, it’s really quite appropriate for her. =3 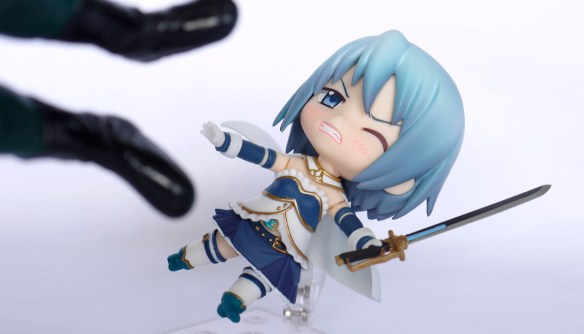 *Random voice-over* Sayaka seems to be in a pinch..what will she do now..?

Bad Guy: Fine I got it, just cut me and get it over and done with.

Nendoroid Sayaka is really fun. With that amount of swords, you know you’re in for a treat and with Sayaka being really easy to pose, I really had no issues whatsoever playing with her. The paintjob is stellar as well and her aesthetics are really pleasing. Only complaint I have of this release would be the lack of a bent leg. That would really go so much more towards taking more convincing action shots so it was a bummer. Other than that, if you already have the Figma Sayaka, the Nendoroid is exactly similar, just that it’s smaller..and much much cuter. I’m rather neutral with this release but since I was already exposed to the similar Figma..you can’t really trust my feelings about it. *You also gotta understand I really disliked Sayaka in the show* XD 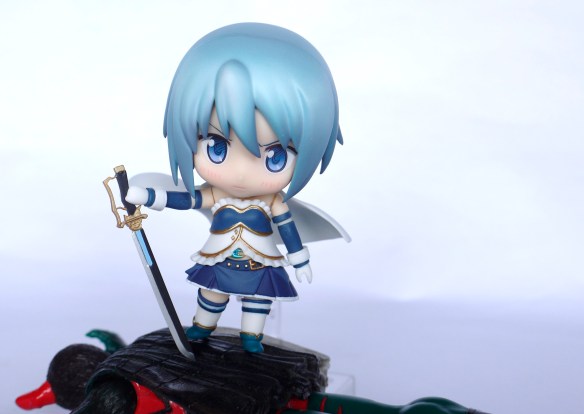 Sayaka: Yeah I cut you.