Here comes the review of goldfish/void princess Inori! Guilty Crown got slightly too messy for me in the end but I really liked Inori so when her Nendoroid rendition was annouced, I decided to grab it with both hands! So here comes her review!

Inori has a really strange/cool outfit which exposes most of her frontal skin and in the anime, kinda hot sometimes but as a Nendoroid..she just looks adorably chubby =3. 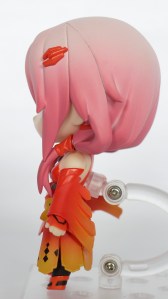 You can see the whole goldfish skirt and fins from the side better. There is a colour graduation from red to orange and despite not being as pronounced as pretty as the Figma or Scale figure..it’s not too bad. The skirt is a rubber piece and it does get in the way if you want Inori to sit..which is a bummer. 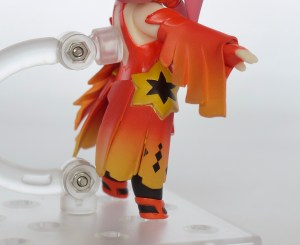 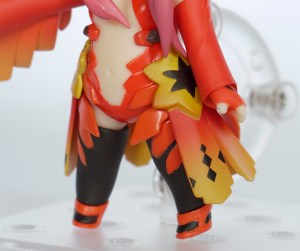 Recently GSC’s Nendoroid paint standards have been slipping and unfortunately, I didn’t get the best Inori that I could have. The paintwork here is kinda messy..there are slight bleeds over the stars..the red costume into the body…the red parts on the black…aaaah…there’s nothing too glaring about the paint misses..but it’s all over the place if you look and that sucks..knowing how GSC is really good at painting stuff just makes me feel worse that Inori was so shoddily done. =( 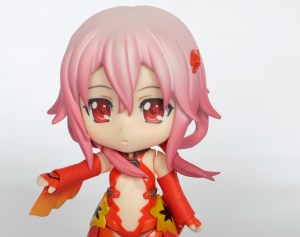 A nice consolation would be that Inori’s hair sculpt is really nice..love those fringes and her pig tails can rotate about! Cheers to that! 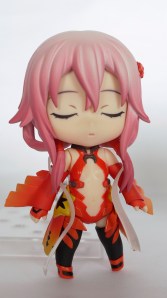 Inori is supposed to walk around with a clear scarf but since it kept falling off and being a real pain, I didn’t use it for the review. Sorry folks! 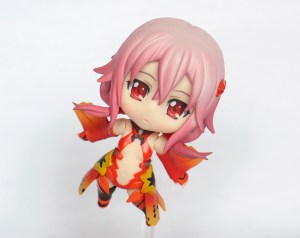 With those frills on her costumes..Inori is really suited to do flying/gliding/swimming poses. XD

Inori doesn’t come with an overwhelming amount of stuff…just really accessories really tied into the show. 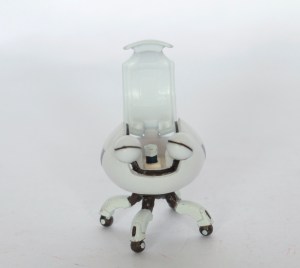 Funnel the friendly robot was provided and he’s pretty fun. Other than having the Void Genome in him, his eyes and legs can rotate about so it’s not just a solid chunk of plastic.

Inori just hanging out with Funnel.

When they sense an intruder! Is it someone from GHQ?

Angry Inori with her tiny pistols is probably my favourite Inori. XD 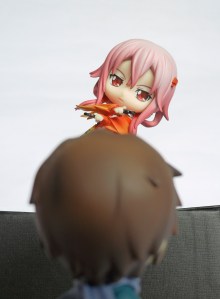 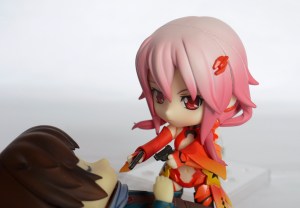 Inori: Are you here to take the Void Genome?

Kyon: Nagato should have a message somewhere..ahh here it is. It says… 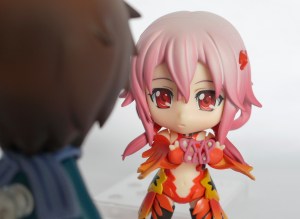 Inori: I belong to you now, I’m your thing and belonging.

Kyon: EH what? How did that happen? Eh whatever..I need this void thingy to go home..do you know where can I get it?

Kyon: Ugh woah..that was weird….still not as weird as Haruhi though.

The effect part clips on to Inori’s waist and requires removal of 2 clips in her body so that the pegs can fit. These clips are real tiny so don’t misplace them!

On a side note..doesn’t this effect part look like something? Rasengan!

Inori is pretty neat overall, with the void effects and Funnel included..however I would have preferred a bent leg to be included for more action poses and a more realistic sword for the void. Mine had some paint quality control issues and that really marked Inori down in my eyes. Should you get it..? If you didn’t watch Guilty Crown or if you did and thought it was bad..there really is no reason to get Inori here. Her accessories are really reflective of the story and her aesthetics aren’t that awesome to warrant non-fans to get her. For fans however..I’m on the fence about this release. I believe the Figma should be more fun whilst the scaled figure should be prettier..if you’re a sucker for Nendoroids then get her..she is fun in her way..however not getting her wouldn’t really kill you as well. XD 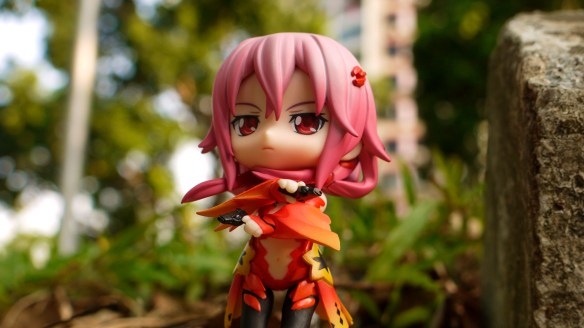