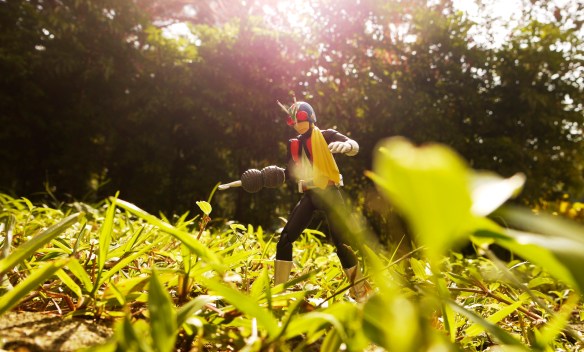 I’m not such a big fan of Riderman..the idea of some dude transforming by just putting on a helmet doesn’t really appeal but for the sake of completing my Showa line-up, I pre-ordered this guy and here he is now! The avenging demon strikes back! 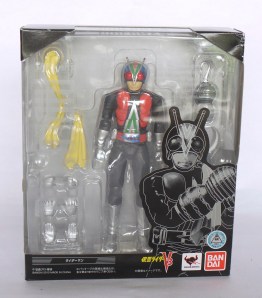 Riderman comes with a slew of accessories and it seems like a nifty little package with a heck load of goodies.

Really plain arms and legs but it’s contrasted nicely by the bright colours of his chest. It’s really similar to Shin Ichigo so if you had that, it’s the same deal.

The silver really pops and the black is matt, right out of the box it exudes a real classy vibe. 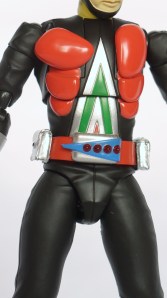 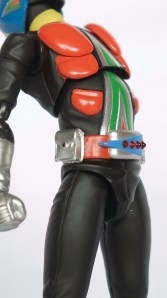 The chest armor shifts around similar to V-3 and Amazon and it has some amazing lean clearance.

Riderman doesn’t have compound eyes but for what it’s worth, the SHF pulled off the original look really well. The face’s skin tone is kinda sallow but the sculpt is good and those triangular patterns have no paint bleed.

When you plug in his scarf, there’s a sudden gigantic piece of plastic dangling from his front. Initially I really disliked it but as time goes by…well you get used to it.

Lookie at all these goodies! Riderman is known for his technological innovation and it’s all represented in those different hands. On a side note, those ropes/strings are packed into a small plastic pouch taped to the blister. So once you take them out, it’s gonna be a pain trying to slot them back into the pouch..=/

Here you have the power arm and rope arm. 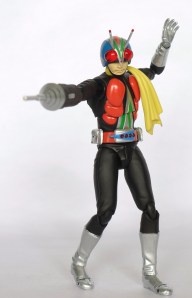 And also the Drill Arm! It’s awesome on how easily the hand switches, no more nightmare plucking ala Super 1.

There’s an awesome amount of different combinations you can pull off and it makes for an immensely rewarding play experience. 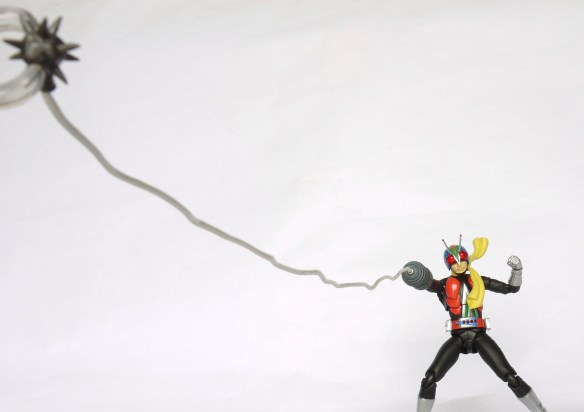 Don’t forget the ropes too! 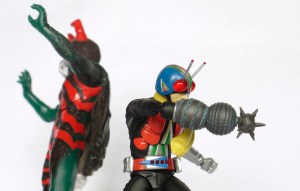 And for some reason, Riderman manages to look cool in every shot. Props to him? 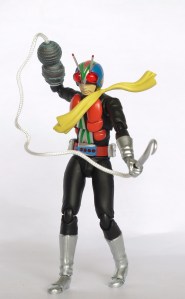 Oh yeah, the flying scarf felt kinda off to me as well. I mean it looks so obstructive…but once again as time went on..I got used to it. 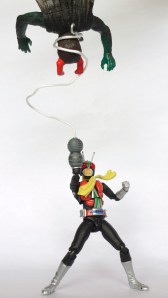 up up and away~

and back down to Earth!

In case you’re wondering..yes he can also put on Super-1’s gloves. So yeap that’s some insane cross-playability! =D

This is one of those rare times where I didn’t care much for the character but the toy just absolutely blew me away. Riderman isn’t even a main character (some might argue he is) but I feel the SHF did him great justice. The playability is off the charts (you can even use Super-1’s gloves) and his aesthetics are great to boot. Price-wise he’s a little more expensive compared to his Showa brethren but since you’re getting so many accessories, it’s an acceptable cost. I really want to recommend this to any SHF fan but since he’s pretty niche….I guess he’s not everyone’s cup of tea? Anyways get him if you can..and since V3 is being re-released, you can get a partnership going on soon =3 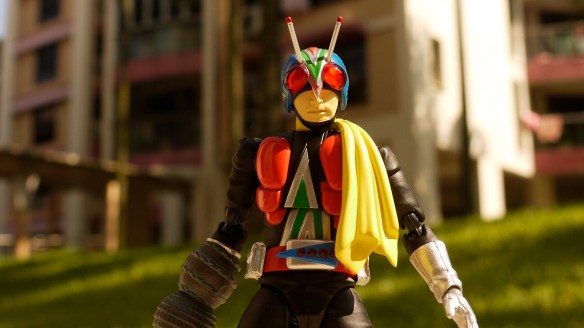