I know it’s already 2013 but hey, for Snow Mikus, time isn’t of the essence and since I have the 2013 version waiting in the wings, it would seem only right to get this pretty lady her share of limelight! Fuwa fuwa Miku time~ 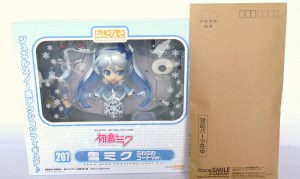 Miku comes in a thicker box than usual Nendoroids due to her stand but what’s unique is that brown envelope! As some web-ordered Snow Mikus had some QC issues, GSC decided to send replacement parts for affected customers which is pretty nice..even though the QC shouldn’t be so shoddy in the first place =3 More on that issue over here folks!

A lil’ size comparison with a standard box.

The whole stand of hers take up the entire rear of the box and it’s pretty hefty. So if you’re shipping her in, remember the extra weight and bulk!

As for the contents of the envelope, you get all the extra bits and pieces that might have been an issue with your original Nendoroid. Lucky fort me, I have no issues with my Nendo so I look upon this as an extra set in case things go awry. The only thing I used was the bow as the original Nendo had a cloudy jewel. 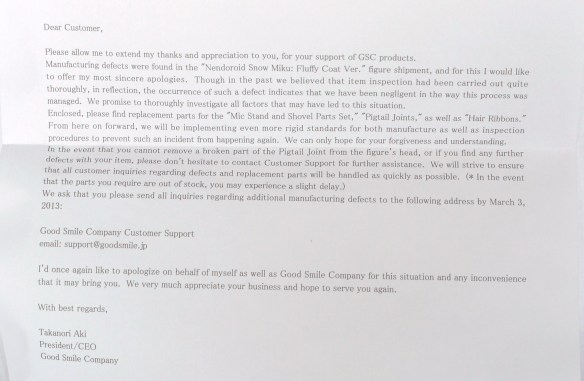 You get an entire letter of apology from GSC as well!

I really like Snow Mikus and the fluffy coat one is just downright adorable. Those twin tails and that coat..~

Even without a stand, Miku can stand on her own due to the twin tails so it’s really up to your tastes. Anyhoos, I’m digging those ear muffs, very wintery~

Only paint defect I found was this ugly splotch on her boot but it’s on the reverse side..so it isn’t too bad =3 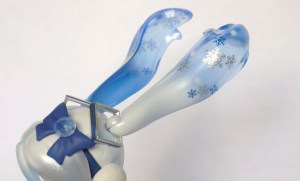 The hair pieces has a really sweet translucent gradient near the end and when it catches the light, it’s gorgeous.

However her fluffy coat doesn’t lose out as well. Other than snowflakes adorning the coat, I really dig the color palette and those white puffy bits. 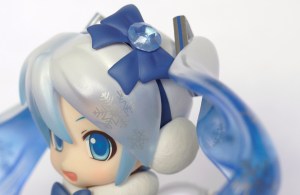 I really dig ribbons on girls and this giant jewel is kinda my favourite bit on her head. Oh yeah, the fringe is kinda opaque as well =3

Only odd thing was how low her speaker is..maybe I need to twist it up or something.

You get a pretty generous sprinkling of accessories here. Other than all the different hand parts, you get a mic/shovel stand, her usual headphones and even a Nendoroid Petit Snow Miku! 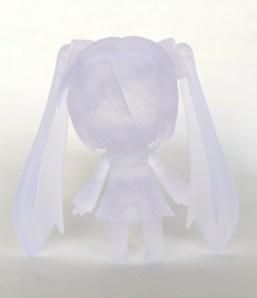 She looks kinda ghostly than snow but even though it’s clear, you can still make out some details.

Snow Miku hard at work digging snow! (I really like the silver of the shovel =3 )

Until our favorite fairy comes showing off her latest prank!

Scarred for life, Snow Miku runs for her life! (This expression is sooo exploitable) 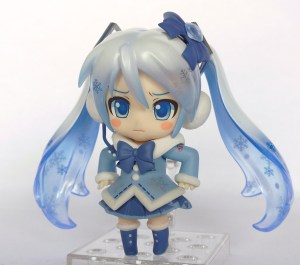 Upon reflection, Snow Miku realises that she’s been had and that made her mad..

A comparison with the original Miku. 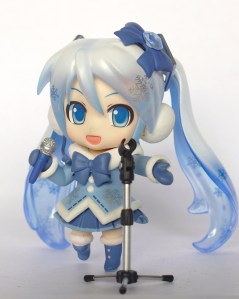 The stage she comes with is supposed to light up as well if you put in some batteries but I was too lazy to go through with that..sorry folks!

I really like this release by GSC and the only thing holding it back for collectors would be it’s exclusivity. The accessories are pretty good and the range of expressions are awesome (For some reason I didn’t take any more photos with the huffed up face) which makes for a really cute Nendoroid. Not to mention the rockin’ aesthetics and pleasant colour. All that being said however, the release is pretty patchy and if you get one without it’s replacement parts, it might be an issue. You don’t HAVE to get this but if it appeals to you and it’s affordable..why not?

A winter concert in Sapporo!!