Super Sonico was a GSC onlne shop exclusive and I was dismayed that I couldn’t get into a group order for this cutie..well, fast forward a a few months and I managed to grab her off a local forum for a decent price and here is her review! =D 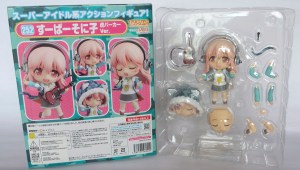 Super Sonico is the mascot for the brand Nitro+ and even though I’m not a fan of flood of figurines in the market, the Nendo is something that I can’t pass over on =X

The stand is a typical jointed Nendo one but what’s cool is that you can either connect through the hood (which is a seperate piece), or normally through the hole in the back.

Right outta the box you can see how frigging cute she is. Those headphones..the tiger print on her parka, that smile =3

It’s nice that the parka is flaring up at the back as well, gives Sonico-chan much more clearance and dynamism. 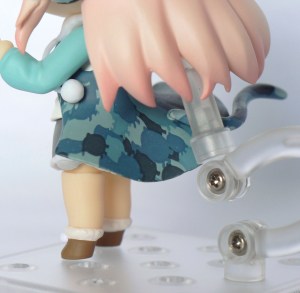 I tried staring but I still can’t figure out what those prints are..cats? But anyways it’s cool that the Parka has a tail but that’s kinda loose sometimes so be careful with yours.

A rather plain T-shirt with a stoned tiger at the front. Very casual and I gotta say..not many Nendoroids with outfits like that! And yes Sonico-chan still has her bountiful assets..even when shrunk down as a Nendoroid =3

Her headphones are seriously nice and the metal band is removable. However you can’t take off the entire headphones so it’s kinda restricted there..but hey it looks good enough to keep on all the time XD

The accessories might not seem be plenty but considering that you get an entirely new head, it’s good enough for me.

The alternate head looks really really good because there are just so many layers to it. I assumed that it would only consist of 2 pieces (front and back) but check out how detailed it is! Even those earphones can be removed..=O

Strumming her guitar! Will probably do a shoot with her and Yui soon =3 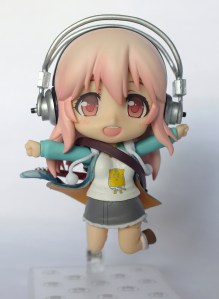 With bent legs you can do plenty of cool poses! And I have to admit, I got most of my ideas from Yui-esque poses =/

And the Tiger Hoodie on! I wasn’t a major fan of the winking face so it got only 1 photo..doh! The microphone is pretty tiny so be careful with it =3

Hoodie is pretty much my favourite bit of this Nendoroid =D 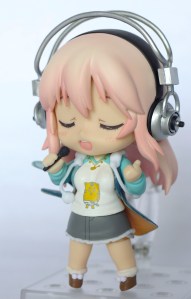 Last expression is this singing one and I can see the uses for it. Place it beside any Vocaloid and bam, you have a Nendoroid Idol group!

Super Sonico is a GSC online shop exclusive so even though her retailed price via GSC shop is similar to other Nendoroids..there’s bound to be some middleman cost involved (unless you’re shipping it yourself). Plus now she’s already released so there is no way you can pre-order her again so the prices might be high. Still, keep your wits about you and don’t pay more than you want..I got mine for $70 SGD (4.6K Yen) and it seemed reasonable to me. Anyways back to the Nendoroid…Sonico-chan is reallyreally cute..she comes with a decent amount of stuff..there’s actually alot you can do with a guitar and that Hoodie is just crazy awesome! I wanted her since I saw the promo pictures and now with her on display, I don’t regret it one bit =3. You might have a slew of Super Sonico scaled figures..but right now there is only 1 Sonico Nendoroid..get her while stocks last! XD 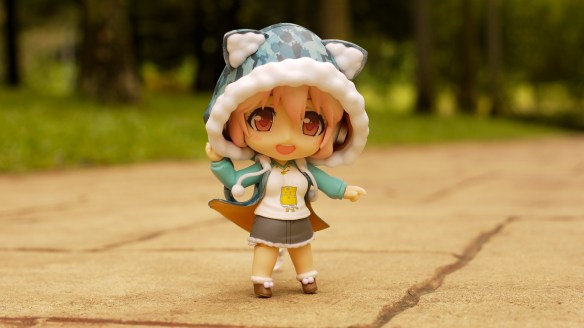