I’ve been in love with Gokaigers since they started airing and was dismayed when Gokai Red’s pre-order got all sold out on Hobbysearch and Ami Ami so I was pleased as punch when I managed to pre-order him with the first release bonus on Ebay. Will he live up to my rather high expectations? Read on to find out! 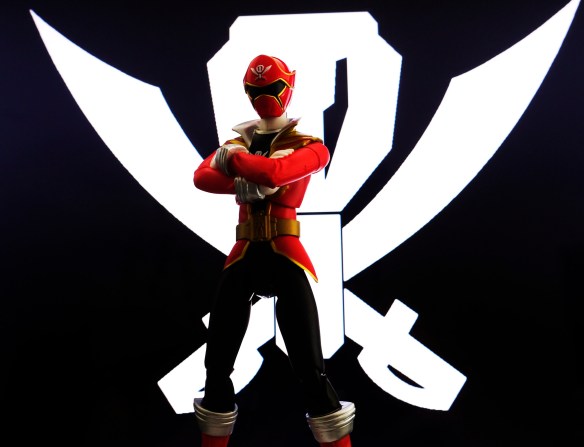 The Gokaigers are the 35th Super-Sentai team and they have a pirate theme going on with them which are reflected on their uniform and weapons.

Gokai Red has the most beautiful SHF box of all the SHFs I have. The front has a red metallic finish which is really attention grabbing. The side of the box is probably my favourite part with the gold and red metallic wording atop a map. Back is standard SHF picture spread except this time the words on top are also metallic red. Just when I thought Ichigo has really nice packaging, Gokai Red comes and blows him out of the water.

As wonderful the box is, inside is pretty much the same. Not that I’m complaining though, I mean what else could they done? =3 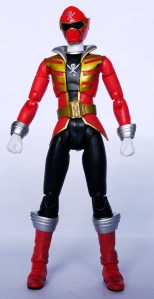 First off I don’t like the gold used to Gokai Red (Captain Marvelous). It’s a dull bronzey gold and compared to the show’s version, it is a big difference with the show’s one being a  shiny gold. Secondly the joints are rather obvious with the seams on his upper arm being rather obvious. Thirdly since his upper boots are painted and his feet are moulded plastic, there is a colour discrepancy. Overall the red on Marvelous is also bare red plastic and it does look rather cheap. Looks aside, I really like the slim look and his proportions.

Gokai Red’s head is also a shiny red compared to the rest of his body just like the show. Nice!

I love the Gokaigers helmet design especially around the visor and the sculpt here doesn’t disappoint! I do wish the eyes were done with clear black plastic but that is a minor gripe on an already nice looking head. If you look under his collar you can also see the Gokai pin moulded on it and it’s tiny details like that which really makes your day. Good one Bandai! His collar and arm area also have cloth details sculpted in making it look more realistic. 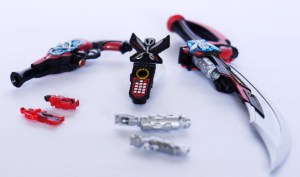 The Gokai items are seriously detailed despite their size and honestly the paint applications are awesome. Of all the tiny stuff I have, these 3 (cellular, saber and gun) just blows all of them away in detail and beauty. The gun and saber also can raise their loading docks and that is way cool. 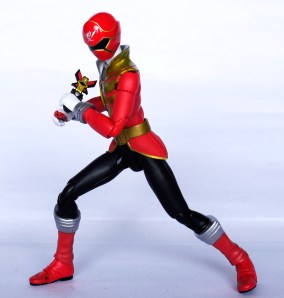 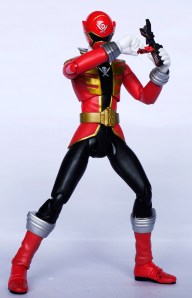 Gokai Red can pull off all sorts of cool poses with no armour pieces in the way with the joints being really smooth and co-operative. Most importantly, he can replicate all the moves he does in the show and that is really awesome. 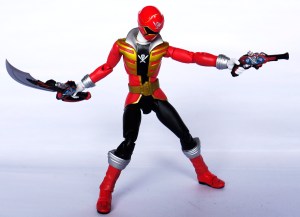 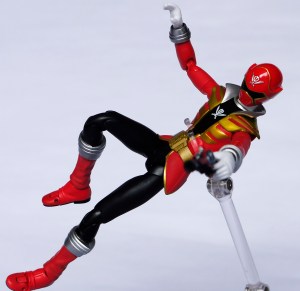 I had so much fun posing with Gokai Red and your are only limited by your imagination. 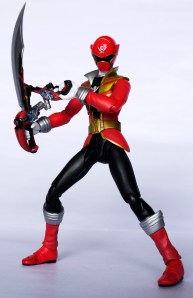 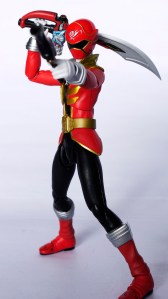 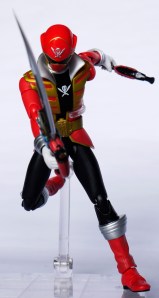 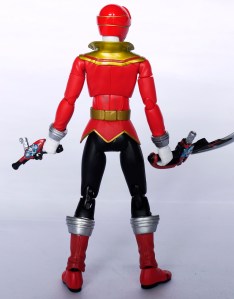 I had so much fun with the weapons that I forgot about his crossed arms part till I looked back into the box.

The crossed hands plug into his upper arm but I wouldn’t recommend switching them out too many times as over time it will get loose.

Gokai Red aesthetically, does look slightly cheap with the dull gold and abundance of bare red plastic. BUT all that goes out of the window when you start fiddling with him and pulling all sorts of poses. His weapons have ridiculously crisp paint applications and looks fantastic with poses, his body’s joints are smooth yet firm and his lack of armour really gives him a tremendous amount of flexibility. If you watched Gokaigers and like it, this is a definite must-get, no doubts about it. For those on the fence or ignorant about the glory that is Gokaigers, watch the show then grab this. Or better yet just grab it now since the sculpt, accessories and posing are all aces. I went into this with really high expectations and although his gold is rather puke, all other aspects just exceeded my expectations. I really love Gokai Red and can’t wait for the rest to arrive!! 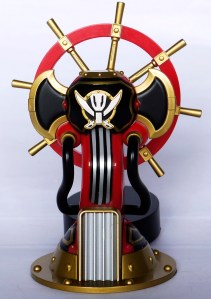 The Gokai Darin is a free item thrown in by Bandai for the first releases for some of their products. This practice normally encourages fans to camp by their monitors and rabidly click the mouse the moment pre-orders are open to avoid missing out on that bonus. Luckily I managed to get Gokai Red with the Darin from Ebay so here is it’s review!

The Darin also has the same gold as Gokai Red did but for some reason, it looks better here. I suppose since most of the gold goes with the black it’s not as bad compared to it flowing the red. The Darin has pretty paint applications and mine has no bleeding across the lines. The red is still bare plastic and the steering wheel is especially guilty of looking cheap. The Darin also has a few dings and scratches but since it’s something free, I’m not too critical about it.

The Darin comes in 3 pieces, the wheel, main body and the black piece. It’s really brainless to put it together and with the crisp paintwork, you get a really neat looking package. 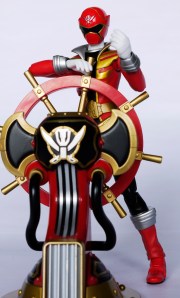 The wheel can turn and Gokai Red does look good with it.  Gokai-Oh Kaizoku Gattai!

The Darin is a really cool freebie and I can understand why everyone (including me) was scrambling to get their mitts on the first-release. It definitely beats the Shinkenger’s Kurokos in display and usage and if you’re able to get it, why not? The paint applications are nice, it’s eye catcihing and best of all, it’s free! BUT if you missed the boat and there’s none to be found, don’t let that deter you from getting Gokai Red by himself since he is a really playable S.H. Figuart. The Gokai Darin is really nice to have, but not something that I MUST have with my Gokai Red.

whew 1000+ words and 44 pictures, just shows how much I love Gokai Red eh? as always, thanks for reading!